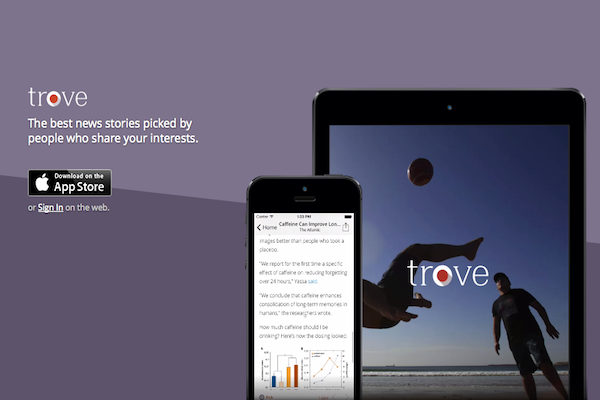 The news aggregation space is getting more crowded, with everyone from the likes of LinkedIn to Facebook trying to get in on the action by building or buying a social reader application.

The latest? Trove for iOS. The new app was developed by the same team who developed the Washington Post Social Reader. We took it for a spin to get a sense of what it contributes to the daily news space.

When you first launch the app, you’re asked to choose three topics that you’re interested in, called Troves. Unlike other social reader apps, which use social networks or news publications to pull stories, Trove is centered on topics. And the subjects themselves can range from the standard, such as “Technology News,” or the very specific, like “WWI: 100 Years Later” and “How Very Joss Whedon of You.” That customization of subject matter is where the users come in.

Much like Flipboard’s Magazine feature, which lets you compile stories from different news sources to create your own personal magazine, Trove lets you create your own topic pages (also known as troves), to follow news on specific topics. Though the concept is simple enough, 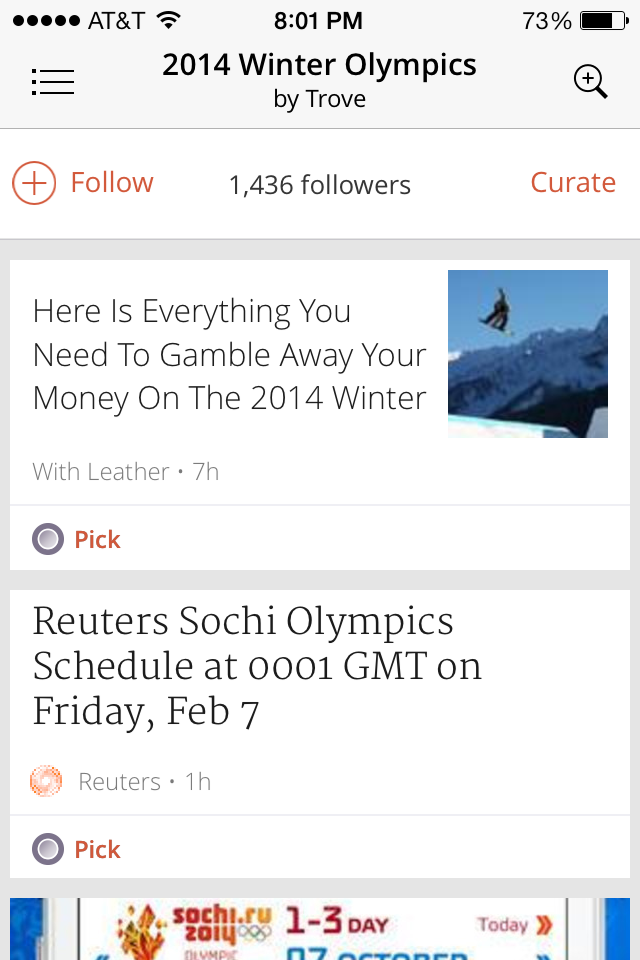 many users will probably forgo the additional steps required to curate their own topics and choose to follow active troves instead.

Like most apps, Trove features a stream on the home section where you can see the latest news from your Troves as well as selected topics that you may be interested in following.

Where it Falls Short

Compared with other social reader offerings, like Flipboard and Facebook’s new standalone app Paper, there’s not much to look at. The layout is minimalistic, all white space and small font. The photos, pulled from the articles, are small for the most part, with certain pictures larger than others.

Trove is a forgettable social reader that, while simple with an interesting concept, fails to have a defining feature that can help it compete with the likes of Paper and Flipboard. And though news curation seems to be the current app market du jour, it may not be as useful or relevant for people who expect instant news delivery. In fact, most of the stories I scrolled past in Trove I’d already come across or read on Twitter.

Social readers have their uses—like helping you discover an obscure magazine or article you may have missed otherwise. But for most people who want to be on top of current affairs or the latest meme the moment a story breaks, news curation apps aren’t the solution. For apps like Trove to gain an audience, they’re going to need to come up with an offering you can’t find on Facebook or Twitter. And they haven’t yet.