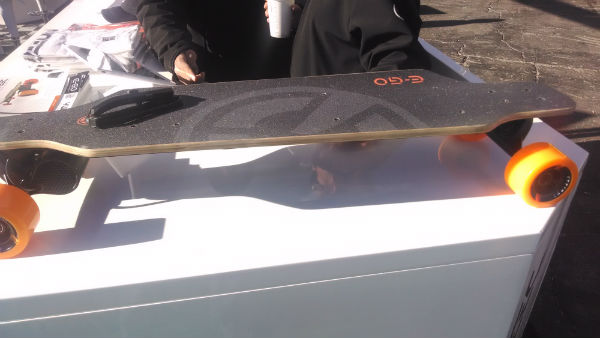 A $699 death-board on wheels is coming to the US this year, and it’s known as the E-GO Cruiser, a personal electric skateboard. The minute I saw it at CES, I just knew I had to ride it. And film it. This took some fateful courage on my part, especially considering my thin stature’s lacking in center of gravity. Verdict?

This thing is an *expletive* blast. And if you don’t want to take my word for it, just watch the video of me riding it below.

The Yuneec Technology product is manufactured in China and will be distributed in the US later this year with a price tage of $699. It can cruise for 18 miles (30km) and recharge in three hours. It’s also remote controlled with an easy handheld button push. You can go forward or backward using your thumb, as well as brake. Top speed is 12 mph, but downhill seems likely to exceed that going max speed. One of Yuneec’s reps said even racing friends heavier than him downhill, the Yuneec managed to win out on top speed. Beat that, physics! They wouldn’t actually let me try it in reverse, and rumors have it they may simply get rid of it since it requires some messing with the controls. But who’s skateboarding backwards, anyway?

The E-GO weighs 13.9 pounds and the battery is slim enough underneath that no one would notice anything different from afar. It does sound like a remote controlled toy, nevertheless. We’re just lucky I didn’t crack my skull. Can you believe they didn’t make me wear a helmet?

I want the E-GO Cruiser and you likely will too if you want to long board around town without pushing off. Get in on the preorder at E-GO for $699.