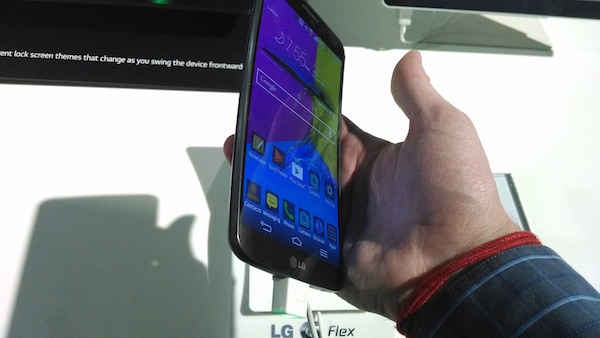 The LG Flex boasts a flexible display—the world’s first, actually. But it’s set in a curved casing that’s rigid and keeps it from actually flexing. Which makes us ask. Why? Why on earth would anyone create, let alone purchase, a smartphone whose main feature (the flexible display) doesn’t actually flex.

What I mean by that is, the phone is permanently curved unless trying to run it over or press it flat. The shape is downright weird compared to any other at CES this week. It’s even a bit uncomfortable to hold it in your hand and feels more than funny in your pocket (I swear we didn’t take it home, LG).  But most of all, for something you stare at for hours a day, it’s simply a really strange perspective to get used to. It’s like reading on a warped scroll, practically pre-renaissance. Slight exaggeration.

Our First Look at the LG G Flex

Our answer: It’s a gimmick. You can bend it flat, so maybe that will help withstand impact a little better, but so what? Glass isn’t going to be any less sturdy on a drop, Gorilla Glass or otherwise. A curved display on a giant television might make a difference in the quality of the image in 4k resolution, but the visual effects on a phone-sized display? Not really worth it. And the argument that the curve is to enhance the sound during a phone call is negated somewhat by the popularity of headphones and bluetooth headsets. Also, do you really need a phone to curve to your face? Okay, we’ll compromise. Hitting the mute button with your chin is a little less likely.

Why Bother With The LG G Flex?

The verdict? If you’ve got to have the latest crazy idea, one that doesn’t look like any of the other smart phones out, then maybe you’d want to give this a try. Otherwise, we’re recommending you imagine the awkward bulge in your pocket.  Is that an LG G Flex or are you just happy to see me?