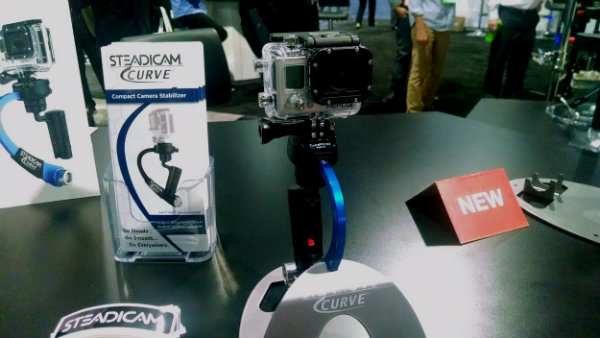 One of the more exciting booths at CES 2014 is the GoPro team. They have been boasting their fancy GoPro Hero lineup which has made first person video into an artform. As beautiful as their videos are, the GoPro cameras encounter one major problem even when holstered: Shakiness. And what good is that video of aggressive mountain biking or reckless base jumping when the GoPro’s image stabilization fails? Enter Steadicam Curve, a stabilizer for the GoPro Hero and right next to their TV-laden CES booth.

The accessory for the amazing HD cam is cool in and of itself, allowing you to balance the camera no matter the turbulence involved. It also fits in all of the GoPro standard mounts. The aluminum frame steadies your GoPro cameras on a ball mount, giving it that gyroscopic counterbalance needed to shoot a steady racing scene or skateboarding on quarter pipe. Just to prove it Steadicam Curve’s team put one right at their exhibit with a couple skaters ready to demo it live.

The Steadicam Curve comes in four different colors (Red, Blue, Silver, Black), and goes for just $100. While made of cheap aluminum and plastic, it’s definitely more inexpensive than more professional counterbalance cam-steadying rigs. To guide the Steadicam with your hand, you steer you use your index fingers. I tried it out, but found the handheld coordination needed to steer the camera is fairly difficult to master, but practice makes perfect. You can see my short and sweet demo below. To learn more, check out Tiffen’s Steadicam Curve brochure.