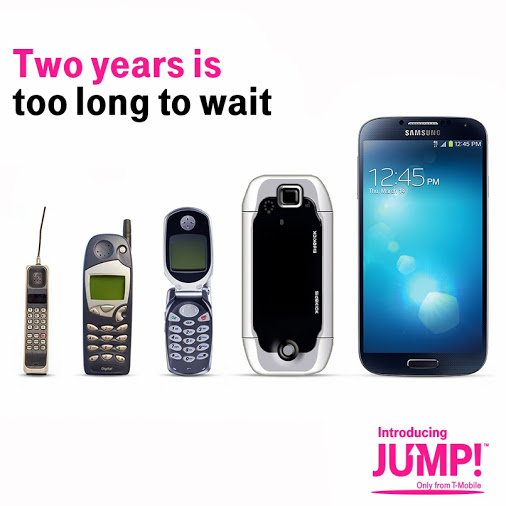 Today, T-Mobile held a press event in NYC to unveil some of its latest revolutionary features and enhancements to its growingly popular wireless service.

Here’s how it works: Customers can upgrade to a new phone, financed through T-Mobile’s Equipment Installment Program (EIP), twice every 12 months after they’ve been in the JUMP! program for six months. Simply trade in an eligible T-Mobile phone in good working condition at a participating store location. Any remaining EIP payments will be eliminated, and current customers can purchase new phones for the same upfront pricing as new customers, with device financing and Simple Choice Plan, a no-annual-service contract.

“At some point, big wireless companies made a decision for you that you should have to wait two years to get a new phone for a fair price. That’s 730 days of waiting. 730 days of watching new phones come out that you can’t have. Or having to live with a cracked screen or an outdated camera,” said John Legere, president and CEO of T-Mobile US. “We say two years is just too long to wait. Today, we’re changing all that with the launch of JUMP! Now, customers never have to worry about being stuck with the wrong phone. And, yes — it’s really as good as it sounds.”

T-Mobile 4G LTE covers a large portion of the Washington DC area including: Bowie, Wheaton, and Silver Spring in Maryland. In Virginia, the following cities are covered by T-Mobile 4G LTE: Arlington, Alexandria, Falls Church and Fairfax. Landmarks in the Washington, D.C. area covered by T-Mobile 4G LTE include Arlington Cemetery, US Capitol, Lincoln Memorial, Washington Monument and the Jefferson Memorial. T-Mobile remains on target to have nationwide 4G LTE network coverage by the end of the year, reaching 200 million people in more than 200 metropolitan markets.

T-Mobile subscribers will be able to sign up for this new JUMP! plan this Sunday, July 14. For more information, visit T-Mobile’s new JUMP! landing page.