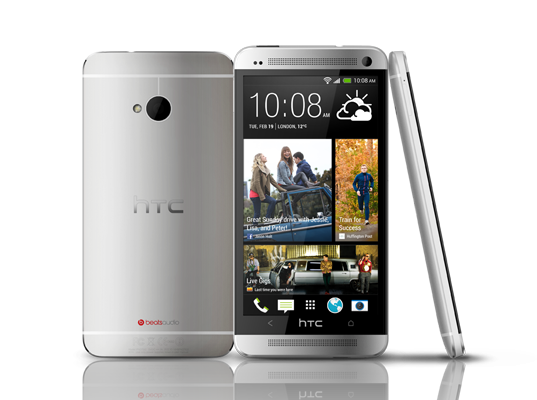 I am sure I have used the phrase “This is the One” before. Oh wait, I have. But this device is too nice not to say it twice. In my review of the HTC One X, I also said that “HTC is back.” With the new One, HTC has not only released a premium smartphone, but in the process jumpstarted their ascent back into the hearts and minds of tech lovers everywhere. The HTC brand should now be considered at the same level of Apple and Samsung.

“Wow, these are some pretty bold claims!” you say? Well, I stick by my story when I tell you the HTC One is the best phone on the market today. Maybe even on the planet. “Best smartphone on the planet!?” you say? Yes. Without a doubt. “Oh come on. Tell me more!” Well then read on I say.

The hardware on the HTC One is one of the main reasons the device is labeled as “premium.” In the past, usually the price and software features will dictate the premium label, but it is the hardware that steals the show here. The aluminum case is extremely durable. Check out this video on how the One was built:

From the moment you remove the One from its box, you can tell how much effort HTC invested in building this device. There is a heavy feel, but not too heavy where it becomes obnoxious to carry in your pocket. The 4.7″ 1080p display is unbelievably sharp and displays media just as good as your flat screen TV. The Beats audio with BoomSound certainly sets this device apart from its competition in the audio department. In fact, everyone I showed the device to asked me if this was “the device with the speakers in front?” Congratulations HTC. Your marketing campaign worked.

On the inside, the HTC One’s hardware matches its impressive exterior. The One is powered by a 1.7GHz quad-core Qualcomm Snapdragon 600 processor which keeps the device humming.  Apps launched in the blink of an eye and multitasking was a breeze. The One comes with 2GB of RAM and either 32 or 64GB of storage. The AT&T version I reviewed came with 32GB. 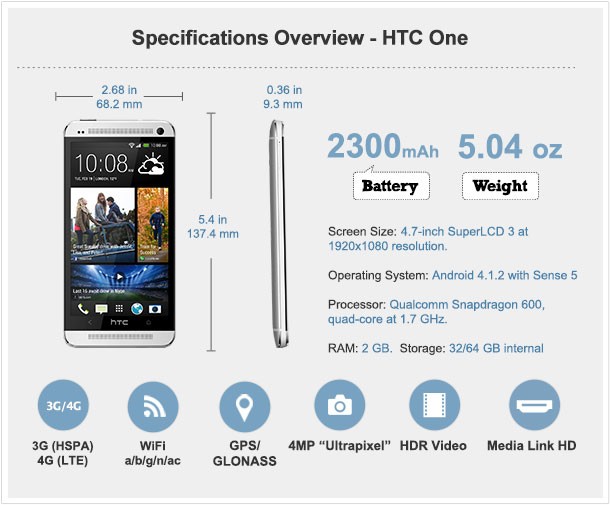 A lot of reviews mention the poor choice of button placement on the HTC One. Rather than the usual format of having a home, menu, back and multi-tasking button, the HTC one only has a back and home button. You can access the app switcher by double-tapping the home button and you can access Google Now by holding the home button. The menu button is baked in to the apps, so there is still a menu option. While the button choices are certainly not ideal, once you conquer the minor learning curve, no true limitation is present.

Battery life was excellent on the HTC One, usually lasting for 1.5 days with moderate to heavy use. Coming from a Galaxy Nexus that barely makes it through the day, I can really appreciate the battery life on new devices such as the One and RAZR series. Manufacturers are finally starting to crack the code on battery optimization.

The camera on the HTC One was absolutely stunning. For a 4mp camera, I was really surprised at how well the photos turned out. The camera application has a few perks like the ability to take panorama images and there’s also a camera mode called Zoe, which allows you to take up to three seconds of video and 20 still shots simultaneously. You can also take stills from videos, which is pretty neat as well.

While we don’t rate phones on a scale here at TechVoid, I would give this phone a 9.5 out of 10. The .5 deduction comes from the software choice. Specifically, HTC Sense 5 running on Android 4.1.2 Jelly Bean. Although there are many enhancements brought forth by Sense 5, such as BlinkFeed and updates to the camera software, I would much rather prefer Vanilla Android Jelly Bean on the HTC One. I was also a bit disappointed that the One is not currently running the latest version of Jelly Bean, but hopefully users will see an update in the not too distant future.

For some reason, users are not able to select default apps they want to handle actions such as launching an Instagram photo or location. For example, when I click a URL on my Galaxy Nexus, I am prompted by the system on whether I would like to use Chrome or Firefox. If I click an address, I can open that in Firefox or Google Maps. There is no such prompt on the One, however, as users are stuck using the system default browser. To most users, this is certainly not a deal breaker, but one of the reasons I prefer Android over any other mobile OS is that I have choices in which apps I want to handle certain actions. I’m just not sure why HTC wants to limit a users’ choices.

But focusing on the good with BlinkFeed, I really enjoyed personalizing the content I wish to receive and having new articles displayed in a visually appealing home screen. If you don’t want BlinkFeed as your default home screen, you can choose one of your other pages to use. See how nice it is to have choices? Some may not like BlinkFeed and yes, there is no way to completely get rid of BlinkFeed (without rooting or choosing another launcher), but I truly feel this feature adds value to the user experience.

Overall, the hardware on the One is what sets it apart from every other smartphone in the market. The combination of premium materials, a gorgeous display, a sharp shooter and great battery life make this phone the One to beat. Everyone who has asked me which Android phone they should purchase, always gets the same answer: “The HTC One.” If HTC does bring a version of the One to Verizon, I will be purchasing this device. I may need to try out a custom ROM to really make this device mine but I would still be happy with Sense 5.