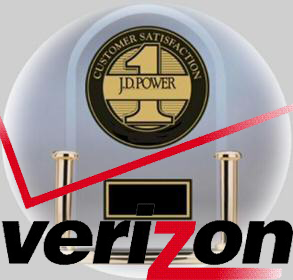 Respected quality and satisfaction service J.D. Power and Associates has ranked Verizon Wireless number one in its latest semiannual U.S. Network Quality Performance study. The study, now in its 10th year, evaluates wireless customers’ most recent usage activities in three areas that impact network performance: calling, messaging and data. Verizon has historically performed well in this survey, especially in the Northeast region (where I live and subscribe to Verizon Wireless service), coming in first a record 16 times in a row.

“Today’s smartphones and tablets require a powerful network in order to make the most of all the features and functionality customers have come to expect from their wireless devices,” said Mike Maiorana, president of Verizon Wireless in Washington, D.C., Maryland and Virginia.  “Verizon Wireless is firmly committed to providing customers in the Mid-Atlantic with the very best wireless experience, expanding, enhancing and maintaining our nationwide industry-leading wireless voice and data network.”

J.D. Power also notes that “the number of data-related problems, especially those related to slow connection speeds, is significantly lower among customers using 4G LTE-enabled devices than among those using devices with older 3G/4G technology standards, such as WiMAX and HSPA+.”

Verizon Wireless invests more than $6 billion annually in its network and now provides 4G LTE coverage to more than 75 percent of the nation’s wireless subscribers.

With the green light given by the FCC today regarding Verizon’s spectrum purchase, Verizon subscribers should be treated to even more LTE coverage in the coming year and should expect to see the same great coverage and performance Verizon has always been known for.

Read the full press release below:

The study finds that the number of data-related problems, especially those related to slow connection speeds, is significantly lower among customers using 4G LTE-enabled devices than among those using devices with older 3G/4G technology standards, such as WiMAX and HSPA+.  For example, among customers with 4G LTE-enabled devices, the problem incidence for excessively slow mobile Web loading is 15 PP100, compared with the industry average of 20 PP100. Furthermore, the overall problem incidence for excessively slow mobile Web loading is even higher among customers with WiMAX and HSPA+ technology (22 PP100 and 23 PP100, respectively). There are no substantial differences in problem rates for other data-related issues between 4G LTE and WiMAX and HSPA+ technologies, such as Web and email connection errors.

“It’s very interesting to see the stark performance differences between the newest generation of network technology,4G LTE, and other network services that were the first offerings of 4G-marketed devices in early 2011,” said Kirk Parsons, senior director of wireless services at J.D. Power and Associates. “With the network advantages of using 4G LTE technology, in terms of spectrum efficiencies and increase in data connection speeds and reliability, it’s not unexpected that wireless carriers are rushing to expand and upgrade their networks to align with this latest generation of service.”

“Based on varying degrees of consistency with overall network performance, it’s critical that wireless carriers continue to invest in improving both the voice quality and data connection-related issues that customers continue to experience,” said Parsons.

The 2012 U.S. Wireless Network Quality Performance Study–Volume 2 is based on responses from 26,695 wireless customers. The study was fielded between January and June 2012.