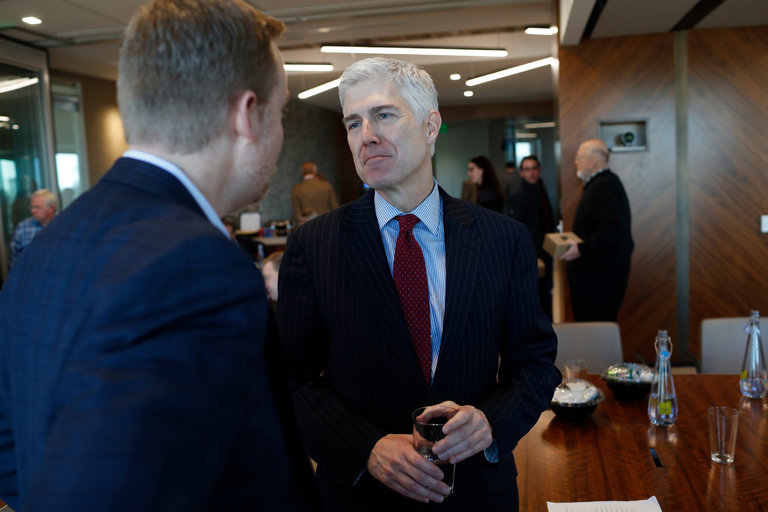 Last night President Donald Trump announced his long-awaited Supreme Court nomination of Judge Neil Gorsuch. The pick was announced in an unusual reality TV manner.Trump made his decision during prime-time television via Facebook Live, and brought the two finalist candidates Neil Gorusch and Thomas Hardiman to the White House and made his decision as the cameras rolled.

His decision to go with Judge Neil Gorsuch was highly praised by Conservatives for his similarities to the late Judge Scalia. And at the age of 49, he could provide a strong shift in Supreme Court decisions for many decades to come. “Depending on their age, a justice can be active for 50 years,” Trump said. “His or her decisions can last a century or more, and can be often permanent.” By Trump’s count, Gorsuch could serve to the unlikely age of 99. However, regardless of Trump’s designations, there are a wide range of pressing social and economic issues that Gorsuch may provide a lasting impact on. And Gorsuch will undoubtedly be involved in decisions on complex issues related to the tech industry.

One possible case that is currently being decided at the lower courts is Microsoft Corporation vs. the United States, which could be on the Supreme Court’s agenda in the next few years. In 2013, a New York federal judge demanded Microsoft release emails associated with a user’s account. Since the emails were stored on servers based in Dublin, Microsoft argued to the court that the US doesn’t have the jurisdiction over servers based in other countries.

Though the Second Circuit of Appeals sided with Microsoft last year, the government has ordered a second hearing and may find its way to the Supreme Court if Microsoft ends up losing the case. This case may set a precedent over the type of information that the U.S. government may request from tech companies for the means of combating cyber terrorism.

The American Civil Rights Union and the Council of Islamic-American Relations filed a lawsuit against President Trump’s controversial Executive Order on immigration temporarily banning travelers and refugees from seven predominately Muslim countries. Though not directly impacting the tech industry,  leaders in the industry, including Amazon‘s CEO, Jeff Bezos, and Google’s Sundar Pichai, have both thrown their support behind the lawsuit. This lawsuit may just be symbolic and never reach the Supreme Court, but it will be important to see how Gorsuch, eventually may address issues like these affecting the tech industry from his conservative perspective.