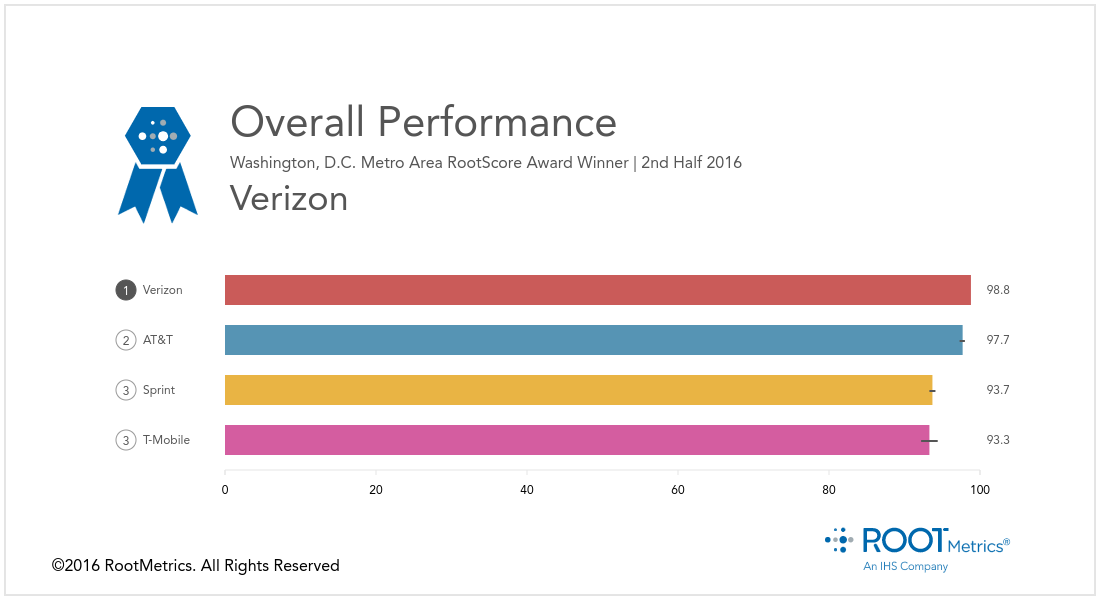 Verizon has taken the crown of wireless performance in the Washington, D.C. area, according to RootMetrics. In the cellular network testing organization’s 2nd Half of 2016 Metro Area RootScore Report, D.C.’s networks were studied for the tenth time to rate end-user mobile network experience. With all the data collected and analyzed, Verizon was awarded the Overall RootScore Award. AT&T was the runner up, followed by Sprint and T-Mobile.

According to the RootMetrics, Verizon managed to win in five of the six performance categories in the Washington, D.C. report, while ending in a three-way tie in “text performance” with AT&T and T-Mobile. Results showed Verizon’s median download speeds have increased tremendously from 12.5 MBps to 23.5 Mbps, and only since February. Verizon has tied for first place in these reports six times since 2011, and now has held the title outright twice (first in 2012). T-Mobile and Verizon shared the award for four consecutive tests previously.

This year, despite AT&T and T-Mobile generally ranking higher in RootMetrics’ reports, Sprint took third overall while still tying with Verizon both in “Network Reliability” and “Call Performance.” The report notes that Sprint’s median download speed increased from 7.3 Mbps to 12.0 Mbps since February, and T-Mobile’s rate of blocked calls increased from 0.2% to 2.2%.

Data above from RootMetrics RootScore Awards

According to RootMetrics, the goal of the competition, “is to provide an accurate characterization of the end-user’s mobile network experience.” The company suggests its reports help suggest improvements to carriers while also offering consumers an entire view of network performance around the nation and their local neighborhoods. Anyone can consult this data directly on the RootMetrics website for free, and the information should help District residents get a better idea of what mobile networks they want to use.

In terms of methodology, RootMetrics uses proprietary software to collect this data. The company’s scientists literally drive around town with the latest “off the shelf” smartphones testing upload/download speeds, measuring call drop rates, cellular signals, and general network performance in areas all over the United States, Canada, and the United Kington in order to produce call coverage maps. In the United States, RootMetrics tests are done indoors and oudoors with random sampling in each state.

Any thoughts of your own on network reliability in the District? Let us know in the comments.