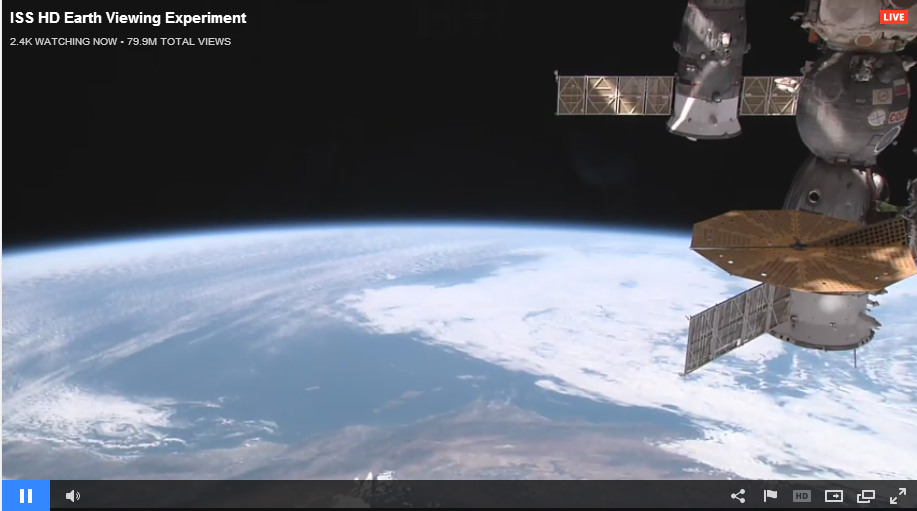 It’s 2016, and I’m finally beginning to believe it. We have self-driving cars you can actually purchase. We launch commercial rockets into space and land them on platforms for reuse. We even have consumer-friendly drones shooting 4k video for everyday YouTube content. But none of these are cooler than the following: NASA hooked up a live, high definition broadcast of the Earth from the International Space Station (ISS), and anyone can view it. The stream is called “ISS HD Earth Viewing Experiment” and will reach its one year anniversary this week.

The stream was activated on April 30 last year, and the cameras used are mounted on the External Payload Facility of the European Space Agency’s Columbus module. They’re aimed directly at Earth in an enclosed, pressurized and temperature controlled housing. The experiment is run by NASA, and it aims to assess how space affects video quality of commercial cameras and the physical equipment. Even cooler, high school students helped design some of the components through the High Schools United with NASA to Create Hardware (HUNCH) program. They’re also working some of the experiment. Feel like you’ve wasted your life watching Netflix yet?

And really, could there be a more mind-blowing feat? Sure, Elon Musk is considering underground vacuum travel via tube, scientists are finding out gravity does indeed have waves, and Google engineers and famed physicists are launching billion dollar efforts to find alien life and mine asteroids. But filming almost every living thing in our solar system, in one continuous shot (a live one), is arguably one of the most incredible things humanity has done for digital entertainment. And high school kids are part of it! If you ever wanted to feel smaller, completely insignificant, yet also connected, you need to check out this Ustream shot from the ISS.

It’s funny, though. Justin Bieber’s average music video trumps the 80 million views on this stream so far. I think this fact alone completely justifies passing this around in hopes of increasing interest, education, awareness and amazement of how far science and technology has come and will continue to progress.