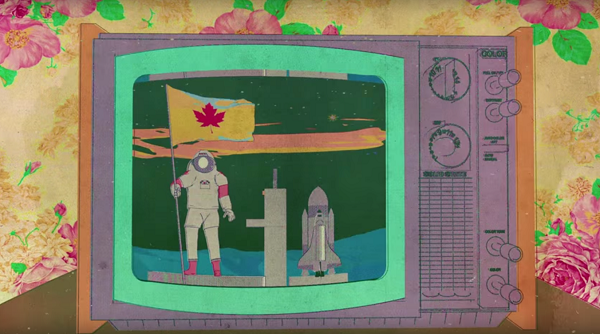 Famed-Canadian astronaut Chris Hadfield has done something never done before by an earthling–released an album of music featuring tracks recorded in outer space. The universal first is one Hadfield is already known for, following his viral music video covering David Bowie’s Space Oddity (“Ground Control to Major Tom”). The album is called SPACE SESSIONS: Songs From a Tin Can and was released today.

The 12-track album can be bought directly on Chris Hadfield’s website in limited vinyl and CD with bundles including a booklet and T-shirts. The 300 Limited Edition vinyls run $59.99 and are autographed by Hadfield himself.  Some of the tracks can be listened to on Sound Cloud and YouTube already, including animated music videos for Daughter of My Sins, Ride That Lightning, and Feet Up.

As the album title suggests, the audio quality (of the tracks recorded in space) is obviously a bit hampered being it was recorded from the International Space Station. Nevertheless, the tin can-audio brings an original charm and twang to the album, resembling the first vinyls ever recorded. Blues, rock, and folk vibes are abundant between Hadfield’s easy-listening vocals and melodic guitar riffs. Meanwhile, the tracks’ lyrics keep this album topical with talk of weightlessness (Feet Up) and blasting into space on a rocket (Ride that Lightning).

You can find the full 12-track album digitally via Google Play and iTunes for $9.49.