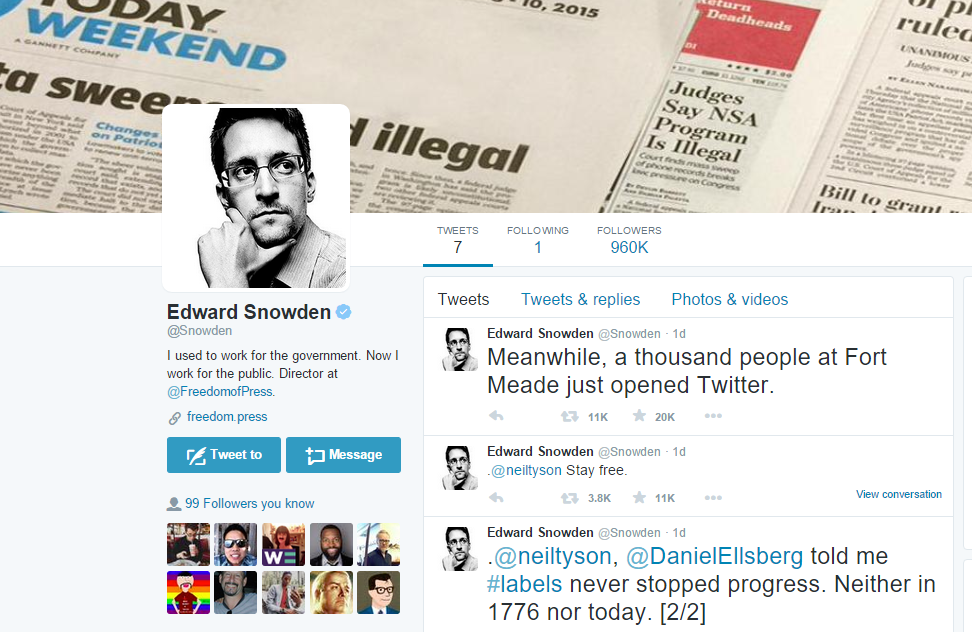 On Tuesday, famed NSA whistle-blower Edward Snowden joined Twitter from Russia, where he has been granted asylum. His first tweet that was heard ’round the world came with a Verizon Wireless joke, “Can you hear me now?”

Can you hear me now?

At press time, @Snowden had reached 960k followers on Twitter, pacing closely with world record-follower count speeds of President Barack Obama (the second time) and Caitlin Jenner, who both joined the social network in mid-2015. So far Snowden has swapped tweets with astrophysicist Neil deGrasse Tyson, plugged Freedom of the Press Foundation, which he’s the director of, and made mention to his label of “traitor” in reference to exposing NSA’s secret program PRISM in 2013 by leaking information to the press.

Recently, Snowden’s side of the story was made visual with the 2014 Oscar-winning documentary, Citizenfour, directed by Laura Poitras. The film accounts for Snowden’s entire plan to actively document himself as he flees to Hong Kong to secretly leak information about NSA’s illegal wiretapping program to press, including an investigative reporter from The Guardian, Ewen MacAskill.  Time will tell how the US government reacts to the continued public rivalry with Snowden, but it’s likely not to resolve itself any time soon. In July, a petition to pardon Snowden was rejected by the Obama Administration. Snowden was officially charged under the Espianage Act, which offers no exemption for whistle-blowers. Source: Twitter