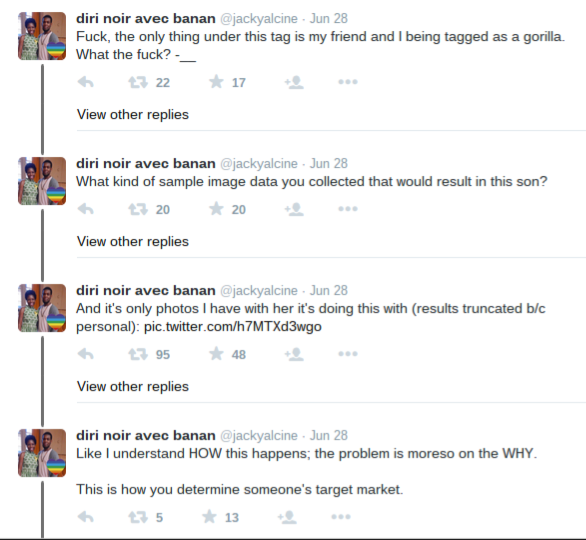 There’s something to be said for the fallout of a political gaffe, but those caused by software can have even worse implications in 2015.  Earlier this week, a Google Photos app engineer realized just that when he was forced to apologize for a Google Photos’ autotag feature, which labeled a black man and woman as “gorillas.”

Google Photos, y’all fucked up. My friend’s not a gorilla. pic.twitter.com/SMkMCsNVX4

The issue came to light when a computer programmer named Jack Alcine found Google Photos kept tagging him and his girlfriend as primates. Angered, he quickly tweeted to Google about the “fuck up.” Chief Social Architect Yonatan Zunger apologized quickly saying, “This is 100% now OK.” After Alcine had reported the racist err, Zunger worked with his software team at Google Photos and continued to talk with Alcine via Twitter to work out the bugs throughout the evening.

@jackyalcine Thank you for telling us so quickly! Sheesh. High on my list of bugs you *never* want to see happen. ::shudder::

The new Google Photos feature allows users to tag and arrange photographs based on objects or even animals. Of course, the feature has been noted as flawed before without such disastrously racist results.  Unfortunately, Google was unable to fix the problem initially and has removed the “Gorilla” tag instead.