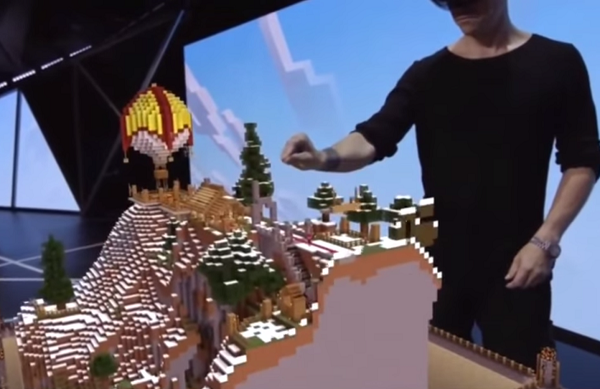 Virtual Reality is in its breakout phase for gaming this year. If you’ve been reading lately, you know Oculus and Valve have partnered with Microsoft to bring Xbox One gaming titles to three dimensions. However, Microsoft has revealed its own tricks up its sleeve with its HoloLens, the first virtual reality hologram device intended for pass through interaction.

During E3 this week, Microsoft brought Lydia Winters, Mojang’s brand director, to show off the new Minecraft game designed specifically for the HoloLens. The infamous block-building game has been a fan-favorite for years, and the E3 crowd had their mind thoroughly blown by the hands-on interaction with first demo of the VR version of the title.

During the demo, Winters and Saxs Persson of Microsoft Studios showed how Minecraft can allow Hololens users to build their worlds on a living room coffee table. With the help of a special camera, Microsoft was able to show the audience what Persson was seeing on his HoloLens during the demonstration.

By pulling, twisting, and even talking to control the camera angles of the board, Winters and Persson showed off incredible structures in the most interactive version of Minecraft yet. “Follow Player, “Closer,” Overview,” and many other phrases controlled the camera angles and game mechanics all without  requiring a controller. For more hands-on work, players can physically grab the map and rearrange items. Microsoft says all console controls can be accessed through voice or hand movements while using the HoloLens.

Winters was also able to join in on the fun via use of her Microsoft Surface tablet, without wearing a HoloLens, which suggests Minecraft, a multiplayer-friendly game, may be able to work cross-platform even if other users are interacting via HoloLens.

More details of the game will be offered at Minecon 2015 in a few weeks.