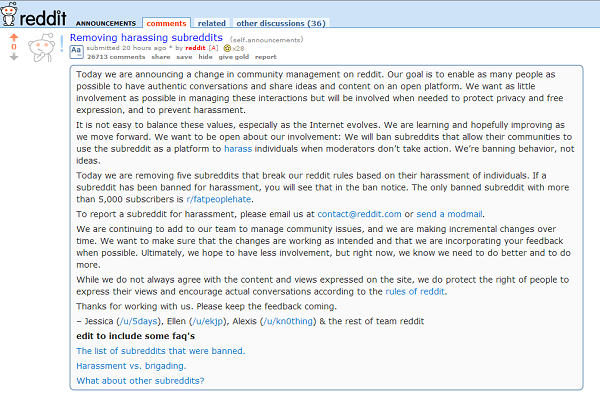 Reddit.com, AKA “The Front Page of the Internet” (and 8th most visited site in the world),  made a Front Page announcement yesterday that it is banning several subreddits for harassment. Subreddits are forums that cover individual topics with their own set of rules for moderation.  According to Reddit, harassment is against a basic site-wide rule that forces moderators to take action against users in violation of this rule to prevent harassment, threats (or witch-hunting/brigading) in their subreddits. Reddit moderators are unpaid volunteers who control content on each subreddit and remain subject to the rules stated by Reddit.com’s founders, including Alexis Ohanian.

The full statement suggests that Reddit’s intention with this action was to “…protect privacy and free expression, and to prevent harassment.” Despite this post being on the Front Page, which ranks posts by the ratio of “up” and “down” votes, Reddit users noted on the thread that the post was negative in up votes while remaining at the top of page. Earlier this morning, a total closer to 4,000 was shown. At press time, the post was no longer on The Front Page with a total of “0” votes shown.

Many of the comments under this announcement defend the subreddits banned, which included one fairly large group (5,000+ members) known as “r/fatpeoplehate,” which was well-known for publicly posting stories and photos of obese people and criticizing them in an obscene fashion. User commenters suggest that while some outright offense groups were banned for supposed harassment, many other subreddit groups (with arguably more offensive subject matter) were not removed.

In addition, numerous comments on the thread accuse Reddit, and its CEO Ellen Pao, of censorship and free speech infringement on its website, along with hypocritical action in consideration to its pledge of a free and open internet. This is all despite the fact Reddit has only banned groups and moderators of subreddits that broke Reddit’s own rules against online harassment (or cyber-bullying), which is a crime (not protected speech) in 22 states (48 for “electronic harassment”). It should also be noted, much like Facebook, Reddit is a free website that sets its own rules and agreement with users, and it can be altered at any time.

Other subreddits banned include (note: offensively named groups) :  r/hamplanethatred, r/transf*gs, r/neof*g, and r/shitni**erssay. For the full Reddit announcement in context, read on below:

Today we are announcing a change in community management on reddit. Our goal is to enable as many people as possible to have authentic conversations and share ideas and content on an open platform. We want as little involvement as possible in managing these interactions but will be involved when needed to protect privacy and free expression, and to prevent harassment.

It is not easy to balance these values, especially as the Internet evolves. We are learning and hopefully improving as we move forward. We want to be open about our involvement: We will ban subreddits that allow their communities to use the subreddit as a platform to harass individuals when moderators don’t take action. We’re banning behavior, not ideas.

Today we are removing five subreddits that break our reddit rules based on their harassment of individuals. If a subreddit has been banned for harassment, you will see that in the ban notice. The only banned subreddit with more than 5,000 subscribers is r/fatpeoplehate.

To report a subreddit for harassment, please email us at contact@reddit.com or send a modmail.

We are continuing to add to our team to manage community issues, and we are making incremental changes over time. We want to make sure that the changes are working as intended and that we are incorporating your feedback when possible. Ultimately, we hope to have less involvement, but right now, we know we need to do better and to do more.

While we do not always agree with the content and views expressed on the site, we do protect the right of people to express their views and encourage actual conversations according to the rules of reddit.

Thanks for working with us. Please keep the feedback coming.