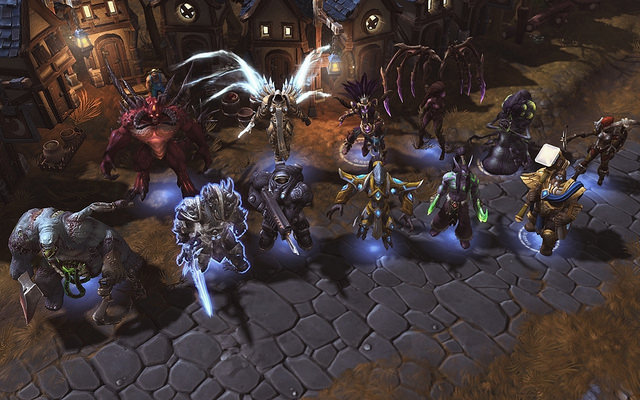 Heroes of the Storm, an online multiplayer brawler, will be officially released June 2nd. Heroes of the Storm is Blizzard’s first free-to-play game that debuted at last year’s BlizzCon, and since then has created an open beta for anyone interested in playing their favorite Blizzard characters. Heroes 1.0 will include seven different maps and over 30 characters (even Tychus Findlay, who unfortunately won’t have a cigar dangling from his mouth).

Playable characters are from Blizzard’s iconic games–Warcraft, Starcraft, and Diablo–with the exception of The Lost Vikings. The four different roles available to play are: assassin, specialist, support, and warrior. Each and every character has a different set of unique abilities based on their roles and character backgrounds, while heroic abilities are chosen after level 10, before each battle. As you progress, you’ll be able to customize your hero through unique masteries and combat styles to suit your preferences, much like any other RPG/MOBA. However, there are restrictions to talents for heroes under level 25, just so you aren’t overwhelmed by choices at the start of the game.

Some other interesting choices Blizzard has made of Heroes is there’s no gold, last hitting, or denying. That’s right–there’s no gold and no items, which have been replaced by talents. As for last hitting, some moves will give you stat boosts for it. If you don’t have those moves, last hitting will only clear the wave of enemies to start a new wave. On top of that, there’s no hit denying, or destroying your own minions to deny another team experience. One good thing though is that the party shares experience and levels up the minute anyone else in your party does. This can be to your advantage during a battle, since gaining levels means more talents to use against the enemy. At the same time, experience is gained if a party member is near destroyed structures or minions, which means leveling up happens pretty quickly if you work well as a team.

Source: Heroes of the Storm