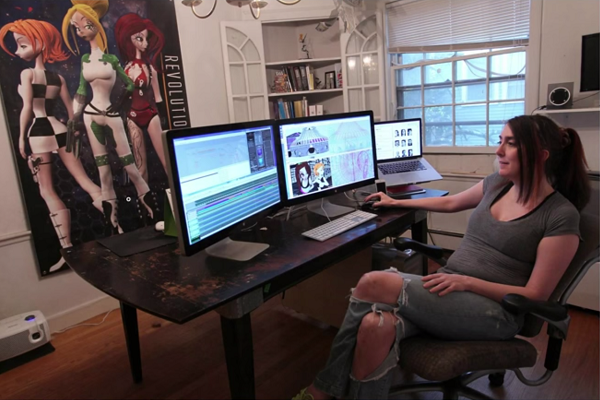 Last week I had an opportunity to sit down and pick the brain of the Co-founder and Head Developer of Giant Spacekat, Brianna Wu. Her indie game studio created the well-received Revolution 60 for the iPad launched just last March. But outside of Spacekat’s video game success, Wu has a well-known alter-ego on social media. She calls herself the “Godzilla of feminists” and has been one of the main focuses of the “Gamergate” controversy. On Twitter, Wu confronts the gaming industry’s gender inequality, pointing out its obvious lack of diversity and its penchant for objectifying women. But as is the nature of social media snap judgment, many of us forget Wu isn’t just the feminist Godzilla; she’s a person.

As we talked on the phone, Wu was traveling to expand on Giant Spacekat’s venture capital. “I am exhausted,” she confessed, but all I could hear was the enthusiasm she had for Giant Spacekat’s new opportunities. “It’s going really well, and we’re really excited about where we’re going as a studio,” she said. She shared some exciting new details about the next game in the Revolution 60 franchise, a sort of Revolution 60 1.5, hopefully to come out sometime later this year. “We want to experiment more with the dialogue wheel,” Wu revealed. “We are going to go all in with innovating on that mechanic. The next game we’re going to ship is basically going to be all about dialogue and choice with all the people in the Revolution 60 universe.”

Although things are going well with the new game and Giant Spacekat, the company will be changing its name. And the reason is, as you may have guessed, Wu’s stark online presence. “It could blowback on my employees,” Wu explained. “I have no problems speaking my mind, but I don’t want the other people on my team to get blowback too.” The new name serves to communicate the values of the studio, and hopefully separate Wu from her company.

However, this still leaves Wu a target for Gamergaters. “The more I speak out, the more death threats I get,” she said. Since last October, the threats have slowed down slightly, but not by much. In the past six months, Wu’s received 50 death threats, yet she doesn’t want to fight Gamergaters themselves. What she’s really fighting is the culture the gaming industry has bred and continues to foster.

“Gamergate is about gamers who feel like the culture belongs to them, and they don’t feel like it belongs to women, people of color, or gay people, or transgender people,” she said. “And why would they? Everything about games has been built for a very specific kind of consumer for 30 years now. When’s the last time you saw a game from a triple A studio that had a person of color as a protagonist? When’s the last time a game from a triple A studio that had a gay person as a protagonist? How many times do you see these messages that women are the damsel in distress, or the reward, or the sexualized eye candy? I think on the game development side, we’ve been very guilty in setting this culture.”

Indirectly, the gaming industry tends to promote a specific image: white, straight males. “Look at Game Informer,” points Wu. “The people at Game Informer are good people, but it’s hard not to notice that when you look at that company, 17 out of 18 of their editors are men. It signals to the consumer that this is only for this type of person.”

Wu is also quick to note that she’s not trying to push men out of the industry; she just wants them to realize what they do affects everyone. For example, Lionhead Studios (the creators of Fable) recently tweeted a drawing of a busty woman covering her breasts with overflowing beer steins for Cleavage Day. It caused outrage. Lionhead quickly removed the tweet and issued an apology.

“I wasn’t personally offended by the post. But when you see good men in this field doing things that unconsciously say games are only for this specific type of person, what you’re seeing now is organized pushback,” she claimed. “I think what you’re seeing now is a more organized effort to make games more inclusive to hold the industry accountable. Over time, that accountability will lead to direct changes.”

The video card manufacturer NVIDIA also received some recent internet-backlash after featuring scantily-clad pole dancers at its sponsored party at the 2015 Game Developers Conference in March. Redditors were quick to jump on the controversy along with as was Wu to retweet pictures of the event to her followers.

Exotic dancers at a @nvidia party? It’s time for us to grow past the frat house. This is just embarrassing and dated. pic.twitter.com/FmnvCu7gNH

All of this pushback is still fairly new for this industry, and consumers likely won’t see significant changes in the industry for some time. And it’s not that the gaming industry is evil or directly trying to discriminate, either; it likely just hasn’t woken up yet. Wu doesn’t demonize it, or even hate it–she’s just a game developer trying her best to show the industry that its perpetuation of a white, male-centric culture is harmful. And hopefully, it listens.

For more from Brianna Wu, check out the video below to see her speaking out on Gamergate: