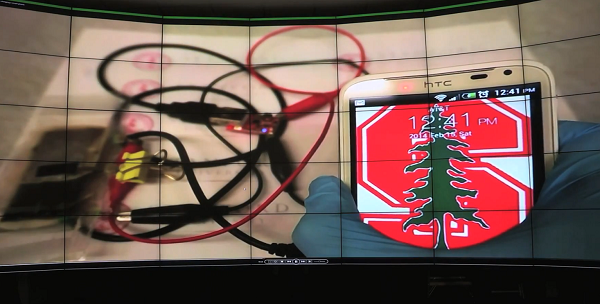 Those lithium-ion batteries in your devices could be limited compared to new battery technology built by Stanford University researchers. Using aluminum and graphite, scientists put together a battery that was able to last 7,500 cycles without any loss in energy storage capacity. That makes this incredible “ultra-fast aluminum-ion” battery outlast current lithium batteries by 6,500 cycles with even higher voltage at 2-volts of electricity output.

Nature‘s journal first reported the technology innovation, and Professor of Chemistry, Hongijie Dai told Phys.org that his team has “…developed a rechargeable aluminum battery that may replace existing storage devices, such as alkaline batteries, which are bad for the environment, and lithium-ion batteries, which occasionally burst into flames.”

The aluminum battery is uniquely built with a graphite cathode and an aluminum anode. This is paired with an ionic liquid electrolyte in a special polymer pouch. This electrolyte is actually much like the salts in your Gatorade, making it much safer than heat and fire-inducing lithium-ion.  In fact, this method is so safe, Dai and his team told Nature that they’ve drilled holes into these batteries without so much as a spark, while they continued to function. They’re also incredibly flexible. In the video below, Stanford’s team can be seen bending these batteries while continuing to power smartphones and LEDs.

Better still, these batteries have the potential to replace not only all lithium-ion batteries in smartphones and computers, but disposable alkaline batteries (i.e. AA and AAA batteries) and current storage technology used for the electrical grid. This innovation is also much more environmentally friendly than lithium-ion and alkaline batteries, as aluminum and graphite are recyclable, and ionic liquid electrolytes pose less of a threat to the Earth’s soil.

So what about charging? The team’s research has shown these batteries will charge to full in as little as one minute.

Want to learn more? Check out Stanford’s video of scientists explaining the new technology above or head over to Phys.org for the full story.