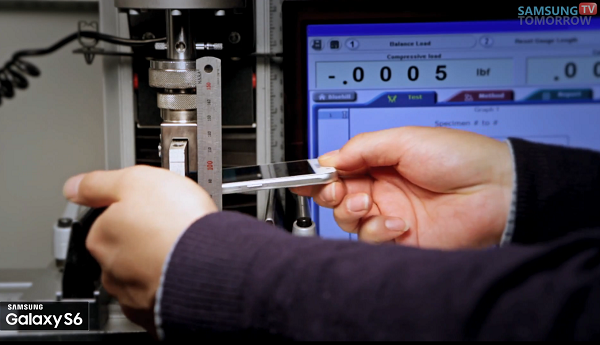 The Samsung Galaxy S6 and S6 Edge have some blatant concerns since its debut last month. The most obvious? BOTH sides of the devices are glass and we can’t understand why (remember the iPhone 4?). We all know the end of this story. Snap, crackle, $$$. Of course, Samsung has also removed Galaxy-lovers favorite feature–external SD storage–in favor of cloud storage. Fortunately, despite Samsung’s glossy and double-sided Gorilla Glass III design, the smartphone manufacturer has recorded its own durability tests showing some incredible flexibility.  Surely, Samsung is attempting to avoid its own version of Apple’s “#bendgate.” In addition, crash and drop tests showing up on the web are proving an incredible amount of resilience to the glass-laden devices.

Curious how these tests turned out? Check below for a couple of videos showing just how tough Samsung’s Galaxy S6 and S6 Edge are.

Samsung’s own durability tests above show that despite incredible amounts pressure in the middle of the devices, the S6 and S6 Edge can withstand up to 80 pounds of force (which is supposedly the most weight a back pocket receives from an average consumer). The phones do not snap or stop working in this video, but we leave it up to you if seeing is believing.

In TechSmartt’s tests, surprisingly the S6 Edge takes an incredible beating before the glass actually cracked. The tester repeatedly says he is “surprised it didn’t break on the first drop,” and that he was forced to “intentionally try to break the glass” in order for it to finally break and spiderweb. The camera lens and metal lip seem to take most of the force, making the S6 and S6 Edge fairly ergonomic for your average Klutz. Thoughts of your own? Let us know in the comments.