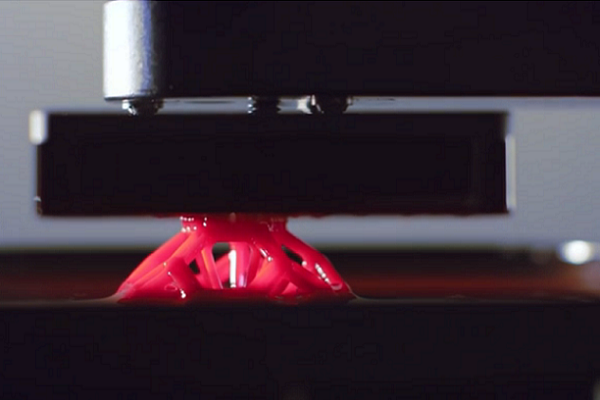 Remember the futuristic liquid metal in Terminator 2 that transformed into the T1000? The film has apparently inspired Joseph DeSimone and his NC Chapel Hill science and engineering team to emulate the technology in the real world. Together they have created a 3D printer that actually prints solid models out of pools of resin. The printer will soon to be sold by Carbon3D, a company recently founded by the same team.

How Does It Work?

Most 3D printers that print in layers. The printing head goes over and over the platform in a specific pattern, depositing a layer of material for hours until the object is complete. Usually, 3D printing takes hours to complete, because each layer is printed individually. Unlike other 3D printers, DeSimone’s printer uses a pool of resin and prints “continuously,” creating consistent models that are solid and smooth rather than jagged and layered.

How Is This Changing 3D Printing?

As noted, 3D printers take hours to finish a model, which is one of the reasons why 3D printing is still in the early stages of being implemented in advanced manufacturing. With Carbon3D’s liquid printer, it takes mere minutes to finish printing an object. At the same time, the lack of layers makes the 3d printed object stronger and smoother, creating a better product. According to Carbon3D, this printer has a wide range of materials to create parts, unlike most 3D printers. This could mean a huge shift in the manufacturing industry, creating stronger, more durable products without seams. However. Carbon3D doesn’t have a price for the printer yet since it’s still in the early stages. For now, we’ll just have to stick to our 3D printers from Staples.