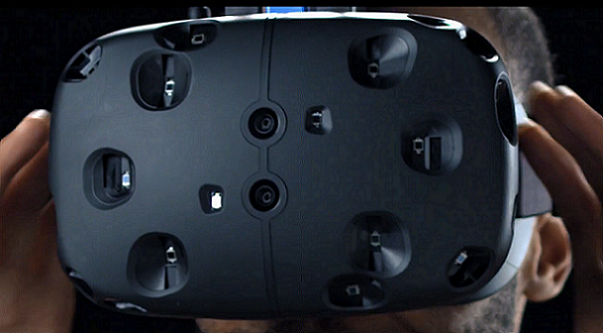 HTC and Valve collaborated to create Vive, a VR headset you can use with your favorite Steam games. For now, the developer edition won’t be out until sometime this spring, and the release for consumers won’t be until the holiday season. The Vive will, however, have a huge launch this week at the Game Developers Conference in San Francisco, allowing attendees to try out the “Steampowered” VR headset.

The developer edition has a 1200 x 1080 pixel screen for each eye, refreshing at a rate of 90 frames per second. HTC claims the Vive exhibits photorealistic imagery that will immerse your entire field of vision, no matter the direction. Because of the complete immersion, the Vive removes the nauseating jitter and lag that was common in previous VR-tech. The gyrosensor, accelerometer, and laser position work together  simultaneously to give players the most natural view of their virtual environment. These three sensors follow users’ head rotation, even if tilted as little as 1/10 of a degree.

Aside from the visuals, the controllers are ergonomic. Yes, there are two; one for each hand. The controllers themselves are tracked through space, although HTC doesn’t explain how. However, with two controllers, this may give the Vive a more comfortable shift from computer keyboards and mouses used by most current Steam players.  It also gives the developers more options for in-game activities and interactions.

Of course, since this headset is only for visual entertainment, gamers have to plug-in their own headphones on the side of the Vive. You also have the option of connecting with the Steam VR base stations, which will allow you to physically walk around the virtual world, as long as the area has 15 x 15 feet of room. It’s about as close to a Star Trek hologram as you can get right now.

The Vive could also be giving Oculus and other VR tech a a run for its money, because the Steam network is so well-established. Game developers will continue to be added to the partners list. In addition, partners like Google, HBO, or Lionsgate have signed on. We’re not exactly certain what they have in mind, but perhaps HBO and Lionsgate will be investing in more interactive TV and film entertainment built specifically for VR, and Google will turn Streetview into a digital vacation via Google Earth.

Can you even imagine the virtual implications of this technology? The sky is the limit. Personally, I think it would be pretty cool to walk around Paris or Game of Thrones’ Westeros, but there haven’t been any announcements.

You can find out more on the HTC Vive here and the Developer Edition here.

Via: The Verge
Source: HTC