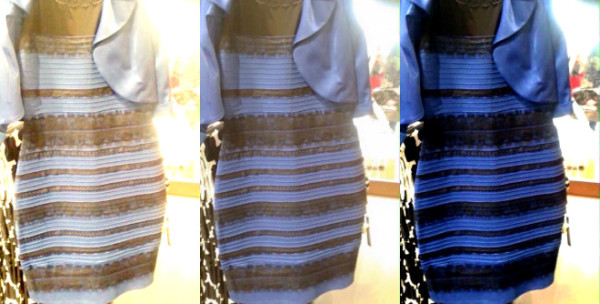 Yes, we’ve finally jumped on the bandwagon of “Dressgate” taking over the internet this week. After some soul-searching (or rather. lots of image-staring), I felt the need to weigh in. After insistently suggesting this dress is white and gold to everyone else on my morning email chain, I’ve now completely changed my mind.

Wired did a great piece on the science behind the confusion between the actual white balance of the photo and the backdrop. But the truth of the matter is, despite the actual dress being blue & black (as revealed by the Tumblr offenders of Dressgate), everyone can see it both ways without any Photoshop alteration. This is more of an optical illusion than anything, and it’s one that is relatively close to that of the infamous spinning dancer gif below.

After some difficult work on a blog post today, I found that I saw the dress in an entirely new light–blue and black. How could this be? Well, perhaps like the spinning dancer gif, a different mindset altogether is needed. Test this out for yourself. Try writing a rhyming poem for a bit and see how the picture looks to you. Next, try doing some math problems and see if your perception changes. Like the spinning dancer, the illusion seems to be aligned with what hemisphere of your brain you’re using. Creative vs. logical and right vs. left, for instance.

Disagree? Let us know what you think about dressgate. Yes, we get it; it’s stupid.