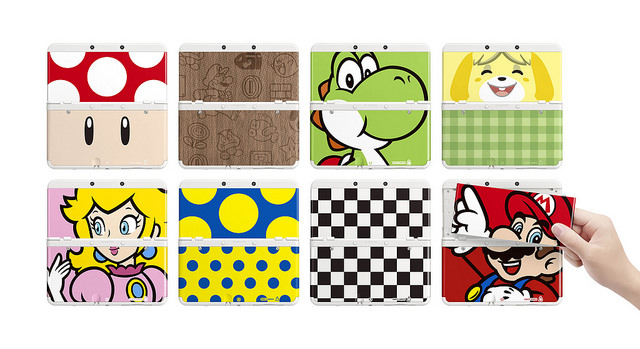 Nintendo has just released the New 3DS XL timed with the re-release of Majora’s Mask. You’ve likely seen the commercial, but the only thing it featured was the C-stick. The revamped console does have some great new features, but what exactly makes this 3DS different than your old one? Read on below to find out.

On the old 3DS, 3D only works when you’re right in front of the screen, at the correct angle. Just the slightest shift can cause a nauseating view, including the 3DS’ home screen. Thankfully, the New 3DS XL uses the system’s inner cameras to adjust the display based on the player’s angle, making 3D a more enjoyable experience.

The Select and Start moving to the right side of the second screen. The power button has migrated to the side to accommodate to the changes. Nintendo has also added three new buttons: the C-stick, ZL and ZR buttons. The C-stick currently allows you to control the camera and to zoom in the internet browser, while ZL and ZR may become more useful in later releases.

The old 3DS will take a couple seconds to load games that require heavier CPU usage. The New 3DS XL has faster CPU performance compared to the last, giving you little to no loading or downloading time. Your current games will look and play better than before, while future games may take advantage of the new and better performance.

The new 3DS is a great update for the last system, but there are a couple disadvantages. For one, the New 3DS XL uses a micro SD card instead of the regular SD card. The New 3DS does come with one, but it can only hold up to 4GB. When changing your micro SD, instead of pulling open the side slot, you’ll have to unscrew the bottom of your New 3DS XL to swap it. Nintendo hasn’t made it easy, either; you’ll encounter some stubborn parts along the way. What else has moved is the wireless button, which is no longer in existence. You’ll have to go under settings to turn wi-fi on or off. For new 3DS owners, you’ll have buy a charger separately. That right; for the first time, Nintendo will not be including chargers for its North American customers.

Other than those minor inconveniences, the New 3DS XL is likely worth the money for Nintendo enthusiasts. Not only is it worth the money, but it’s selling far above previous 3DS sales stats. However, there’s currently a port strike on the West Coast, which has caused New 3DS XL shortages. For those of you on the fence about the new 3DS, it’ll give you some more time to weigh the pros and cons. The rest of us will just have to wait.