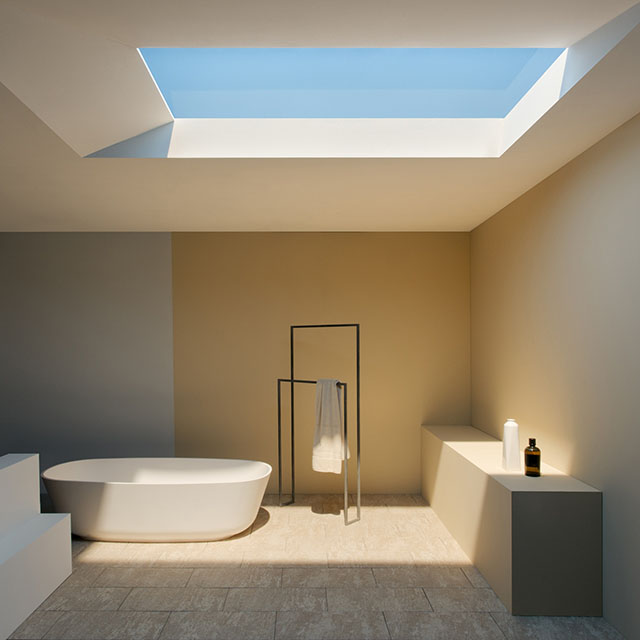 In the short days of winter, many experience seasonal depression or lulls in mood. Without all that nice vitamin D, people’s sleep cycles get skewed and moods altered. Thanks to a new artificial skylight developed by CoeLux researchers, humans could soon feel happier indoors, and even in those “English Basements” so heavily advertised on Craigslist.

The technology tricks cameras and the human eye using a thin coating of nanoparticles over an LED projector. It’s also paired with complex optics that give the illusion of distances between an artificial sky and sun. This simulates Rayleigh scattering, a principle which illustrates how the atmosphere diffuses sunlight. The technology gives an illusion of blue sky and an faux sun (the literal LED). It’s a pretty amazing  trick seen in the demonstration below.

Scientists in Italy want this device to bridge the gap between dark spaces and architectural design by reproducing the effect of how sunlight acts in nature. Color and saturation are matched perfectly in the filmed examples above, and the reactions are awesome. “It’s like magic,” said one demo viewer. Professor Poalo Di Trapani has been developing the CoeLux for the last ten years at the University of Insubria, and it won Light Source Innovation of the Year at the 2014 Lux Awards.

We thought Phillips’ Hue was pretty cool already, but the CoeLux could bring artificial daylight to the darkest of spaces at any time of day. Unfortunately, this technology comes at a bit of an outlandish price: $61,000 and $7,600 for installation. I guess we’ll have to wait for the general consumer version.