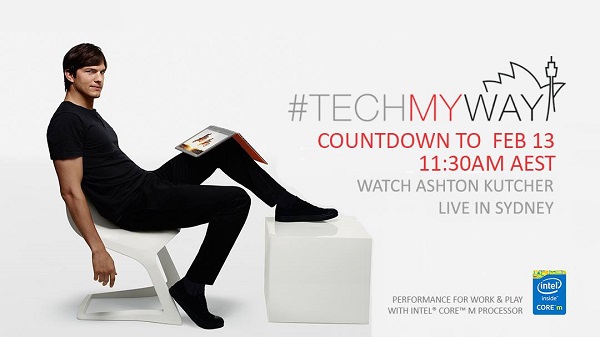 Kutcher is apparently also a tech enthusiast and more recently a Lenovo product engineer. Kutcher’s recent tech investments in Airbnb, Skype, and Spotify shows he isn’t new to the game. Even though Kutcher is immersed in the tech world, when he spoke, he did not give up any news of upcoming Lenovo tech. Instead, #TECHmyway was more focused on inspiration over innovation.

Aside from cleverly plugging his fiancée’s (Mila Kunis) new film, Jupiter Ascending, Kutcher had the audience ask questions. Well, not any question (“There is absolutely such a thing as a dumb question,” Kutcher says), but great questions that expose problems.

Regarding future outlook, Kuther said we’ll eventually see Augmented Reality and Virtual Reality (VR) find their way into our daily lives, as well as permissive access through wearable tech. Through these wearable gadgets (Think smartwatches and Google Glass already), you’ll no longer have to whip out your ID or type in a password. Your voice or thoughts will be your keys instead of your fingers. Honestly, that sounds better than tracing your pattern to unlock your phone. With all these innovations, people could be saving the most valuable thing in the world: time.

Arguably, that’s a key reason tech continues to expand, in hopes of saving us more time. However, tech has also changed human interaction, for better or worse. We’re more connected than ever through the internet, but how will this affect future physical encounters, especially at the beginnings of VR’s capabilities? As we continue to live in a tech-immersed world, what will happen to human interaction? Will we use our time to devote to other human beings, or will it go straight back into ourselves via technology? Thankfully, Ashton Kutcher does not think it’s a dumb question.

What does this say for Lenovo’s upcoming tech is the real question. And it appears Kutcher has answered just that: VR and wearables. Considering Lenovo’s January debut of the Vibe Band VB10 during CES 2015, an E-ink display smartwatch of sorts, it’s not so far-fetched an idea. With Sony, Oculus, and Samsung already competing for a first rate method of bringing VR mainstream, it seems just as well that Lenovo could jump into the ring next.

Check out the #TECHmyway event to hear Kutcher’s, as well as Cheng’s and Parker’s, talks above. Note the video starts at 39:00.