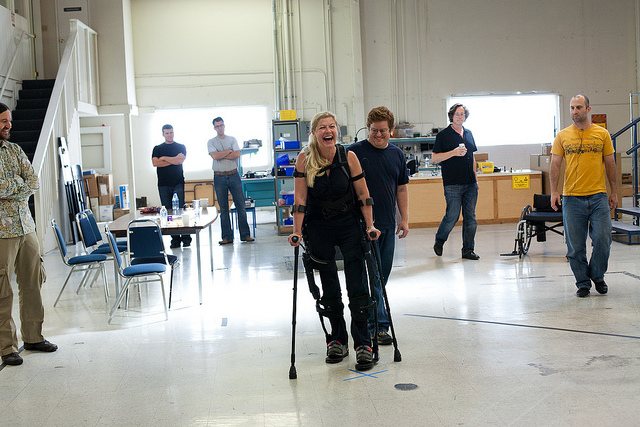 There’s been plenty of experimentation with exoskeletons, but we’re not just talking about Iron Man suits. Plenty of powered exoskeletons are made for military use, but robotics companies are steering towards a more consumer market with a mundane angle: the paralyzed. Physical therapy helps patients with paralysis to learn how to deal with their new lifestyle, but a lot of difficulties arise during therapy sessions. For example, if a patient has weak forearms, it’s difficult for him to maneuver his body during therapy. Those kinds of road blocks could keep patients from progressing or even continuing their treatment. However, by using the powered exoskeleton, a patient can relearn how to walk much easier or allow someone with complete paralysis to go on a stroll.

How do powered exoskeletons work?

Most exoskeletons use hydraulics and motion sensors to detect the shift in the wearer’s weight. From the weight shifting, the sensors trigger leg movement, and the wearer is able to walk using crutches to steady himself. The wearer can then change the settings to sit, stand, walk, or climb stairs. With ReWalk, the wearer will have a watch to change the settings.  The whole system is run by an on-board computer and and comes with Lithium ion batteries to power the motors. So far, ReWalk and Ekso Bionics are the leading experts in every day use of powered exoskeletons.

Currently, ReWalk is the only FDA-approved exoskeleton on the market, but Ekso’s model is used in centers all around the world. With these exoskeletons increasing in popularity around the United States and around the world, we’ll bet they’re pretty safe. They’re also used inside rehabilitation centers or hospitals with therapists who are trained to use them. At the same time, don’t run out and purchase a ReWalk before you’ve tried it. Not only does it cost about $70,000, it also will difficult learning how to use it.

Powered exoskeletons are a great tool to help with rehabilitation. It lessens the need for several therapists to hold a patient during sessions and reduces frustration for the patient. However, it will take a couple years to see more centers carrying this kind of tech. Hopefully centers will have enough funds to start carrying powered exoskeletons for both their patients and their therapists. For now, we DC-Metro area folks just have to settle with driving to Bethesda or Richmond to try them out.

Check out the video below to see a powered exoskeleton in action: