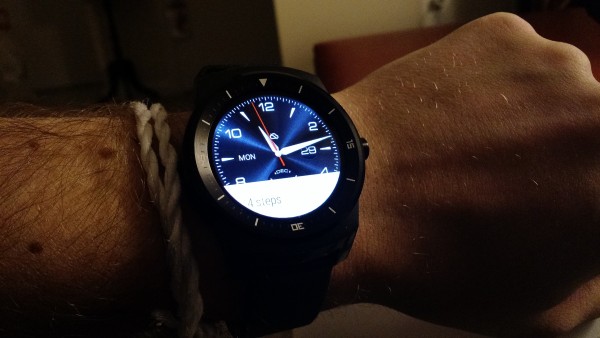 Smartwatch manufacturers have a major competition, and it’s your smartphone. How do you make a watch useful enough to keep your smartphone in your pocket or even at home? The other is, of course, making it comfortable enough to wear on a daily basis without being outright gaudy. The LG G watch R only solves one of these problems, and unfortunately it is not the first. Curious why? Read on down for our full review on the LG Watch R paired with and AT&T Samsung Galaxy Alpha.

The LG G Watch R is a gorgeous device. For once someone has built a smartwatch that’s not so outlandish it looks like a gadget and keeps itself grounded enough in history to look like any other high-end stainless steel watch. This device has a “Genuine leather” black band (it says so on the beige underside) and a bright and colorful 1.3” 360 degree circular P-OLED display. There’s no obtrusive sensor gap on the display like the Moto 360 either. Better yet, the R has an actual, tangible adjustment knob on the side, although it’s unfortunately less useful than it looks (more on that later). It’s also fitted with a thick stainless steel watch face you’d find on any outdoorsy wristwatch with seconds notations along the bezel. The R looks rugged and takes water resistance to IP67^7 making it safe in 1 meter of water for up to 30 minutes. That’s swimming AND shower safe, people. There is a small microphone on the bottom of the bezel and a heart rate monitor on the back of the watch face along with its charging connections.

The charging dock for the LG G Watch R is a small round platform with charging connections and a micro-USB port compatible with all Android charging cords. Better yet, it is magnetic and snaps onto the the watch when contacted. It’s small enough to stick in your pocket (or even lose), which is great if you require to charge on the go.

The 1.3” P-OLED screen (highest quality on the market so far) has plenty of hardware underneath it including 4 GB of storage, 512 GB or RAM and a 1.2 GHz Qualcomm Snapdragon 400. There’s also  410 mAh battery. Unfortunately, there is no speaker, telephone, or camera like Samsung’s famous do-it-all Galaxy Gear smartwatches. The R connects to smartphones via Bluetooth 4.0 and comes with a gyroscope, accelerometer, compass, and a heart rate monitor. 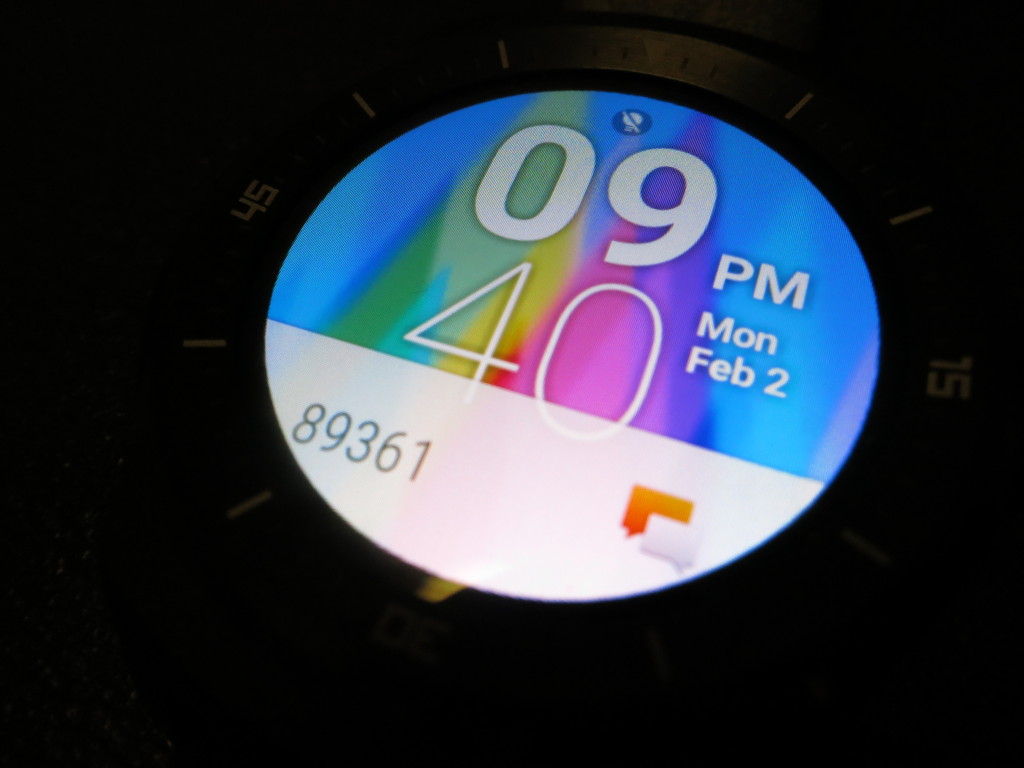 The LG G Watch R is one of the pricier smartwatches at $299, but it’s not necessarily for the features. Unlike Samsung’s Jetson’s abilities, there is no ability to call friends or family directly from your wrist with it (you still have to pick up the phone). And to me this was a bit sad, because a smartwatch without the ability to take/make calls from the wrist just seems arbitrary at best, although I do see how it can be considered a completely redundant feature.

Due to this, in some ways Android Wear leaves a lot to be desired on function compared to early Samsung Gear. Thus, the R is more like the Moto 360, aimed at those more interested in style, fitness, and overall wearability. The device requires Android 4.4 KitKat, so it’s is compatible with most Android devices. This is really great, especially when compared to other manufacturers who are making proprietary Smartwatch software platforms. I’m looking at you Samsung and Apple.

Google Now is the showcase of Android Wear (a smartwatch OS) and perhaps the easiest way to do everything you can on your phone from your wrist. Make grocery lists, send text/chat/email replies, and even looking at turn by turn directions with Google Maps is possible with Android Wear on the R.  This OS connects smartwatches to smartphones via Bluetooth and sync up with all of Google’s applications and other third party options developers have built. All of these settings and software features are directly accessed through the Android Wear application installed on your Android KitKat-compatible smartphone.

The physical control of the Android Watch is intuitive, but also a little confusing at first. For instance, adjusting settings requires swiping down through your list of notifications and apps, then to the left. Or you can hold down the analog knob, which apparently has several very basic functions–waking the screen, accessing settings, and turning it off. A double tap on screen will turn off the display as well.

Swiping down will bring you to notifications including the weather, Google Fit, and other applications. Swiping right will dismiss them. It should look familiar to Android users. This is exactly like Google Now’s stream of card updates, but it also throws in basic smartphone notifications from the likes of Google Hangouts, Gmail, and text messages. However, getting to the applications you’ve synced to the phone is another story. 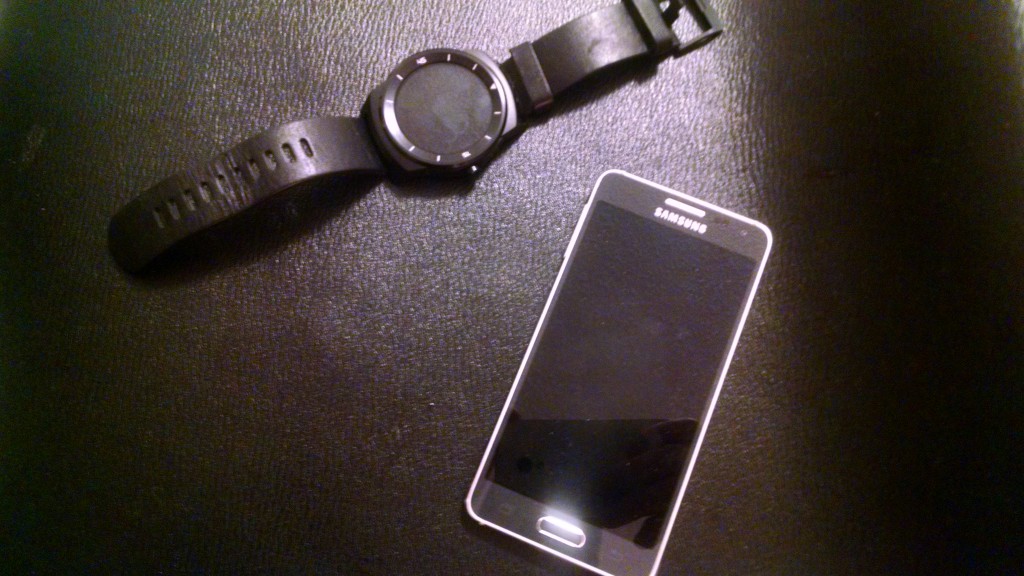 Gmail and Hangouts seemed to pop up the most on lower half of the watchface the most, putting the most pertinent or recent chains first. Replying via microphone is great, but only if you’re articulate. Covering the watch with your palm will dim or turn off the display (depending whether or not you’re in ambient mode [always showing time], and glancing at the device will wake it up. No wild gestures here, thankfully. Better yet, you can say “Okay Google” from the home screen to ask the G Watch R to do anything Google Now does on your smartphone.

Your voice is the easiest way to control Android Wear. Tapping the home screen will take you directly to Google Voice, as it awaits for you to task it. “OK Google” also manages this hands free (when the screen is on). This voice translation is accurate when articulate enough, but confused translations are likely and frequent. This can be really frustrating when forced to repeat phrasing again and again.  Despite the lack of wrist calls, you can tell the R to make calls, send texts (only via your Android mobile), and even reply to email and Google Hangouts messages with voice dictation.

The G Watch R is one of the best Android Wear devices out there because of its great display. Its ambient mode is bright enough and because it’s P-OLED, it uses less pixels than IPS increasing its battery life. In addition, pixels switch on and off, moving around 1 pixel or so every once in a while to avoid pixel-burn in, a clever solution to a display-destroying problem. I never really considered an issue seeing the screen. Plus, if you do, you can always block light with your hand.

In addition, this is was really comfortable to wear.  The R is no bigger than the average trendy watches being worn these days by men and women. I also found it particularly attractive and was complimented frequently in the very fashionable Washington, D.C., especially during the Collaborate Tech Conference a few weeks ago. One woman said, “I really like your watch,” thinking it was nothing but a digital watch. Another startup pitchman asked me, “Is that the new Galaxy Gear?” Clearly LG has done well at building a modern device that turns heads without obviously high-tech.

The heart rate monitor is a bit of an obligatory addition to a smartwatch considering its supposed to be more useful than an everyday fitness tracker.  However, getting to the function is a bit of a maze into the Google Fit application. Accuracy is also easily manipulated by loud music or ambient noise. It’s also something you are going to find difficult to check while running You can see how it works in the video below.

Another fun feature is that the R has an altitude barometer, which shows up on many of the watch faces. This could likely be used to develop apps for measuring flights of stairs climbed or map your mountain climb. Unfortunately, GPS has to be paired the smartphone, so you’re still going to be carrying two devices with you for this functionality.

My major gripe is how annoyingly cumbersome it is to wake up the watch when the display is off or dimmed. As said, you wake it up by looking at it or pressing the knob. The G Watch R does not wake from shaking your arm or raising it, so I found this completely menacing when (often) it refused to wake upon my gaze. When in ambient mode, you can always see the time dimmed like a Moto X’s active notifications.

While this device having no audio whatsoever, you can set an alarm on your phone with the watch. I unfortunately had trouble getting it go off when pairing it with AT&T’s Samsung Galaxy Alpha. You’d think the one flawless thing a smart watch could do is function as an alarm clock, right?

My other issue was the watch knob having almost no cool function. Can’t I set this to open an app on my phone or show the weather or a task Google Now? It takes you to the settings menu after a hold, which is nice, but it just seems like it should be capable of so much more. It’s likely future software updates will change this, whether by Google or third party developers, but for now it’s not very exciting. 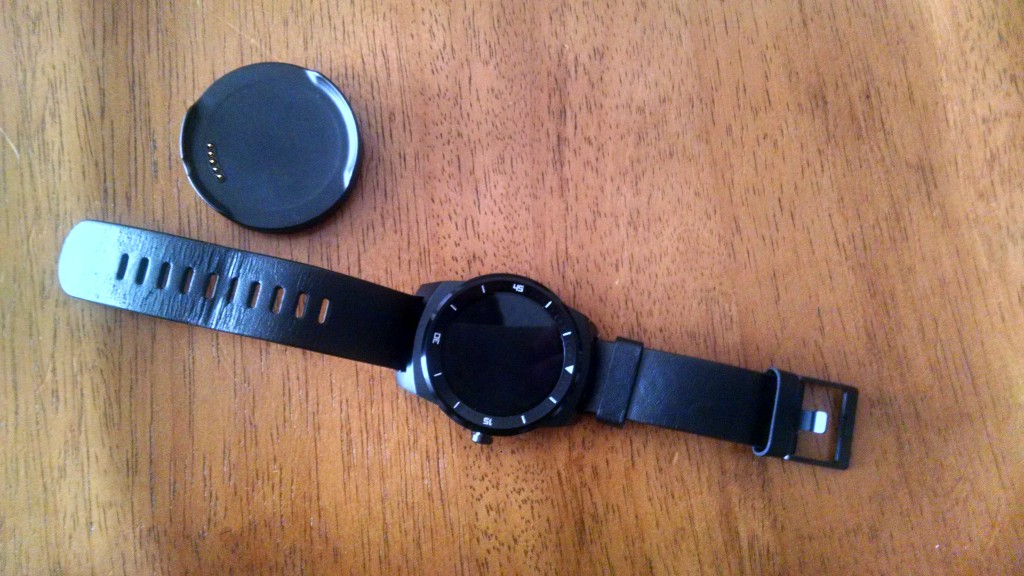 Charging the smartwatch is really easy with that handy, magnetic charging dock. It’s so small and easy to snap in, it’s no burden at all (consider the first Samsung Galaxy Gear‘s charging cradle). Considering the Moto 360 and other smartwatches have faltered heavily on battery life, the R is impressive contrast. I was honestly able to get close to 72 hours of standby time on this device. LG says you can get 36 hours with the display on ambient mode, and that’s pretty amazing considering how small the battery is.

Android Wear is making strides for smartwatches, but it’s not the Jetson’s future we’ve dreamed of just yet. Most of the things this gadget is capable of is completely redundant to your already Google Now-equipped smartphone. While checking email/weather/time is quicker and easier with a smartwatch, unless you find pulling out your smartphone that much more laborious or distracting to your life, this might be a superfluous buy. Still, this is a beautiful accessory, and arguably more than the Moto 360 due to the fact there is no flat tire sensor crowding the circular display. You can pick one up for yourself at AT&T or Google Play for $299.00.

What’s your take on smartwatches? Let us know in the discussion below.