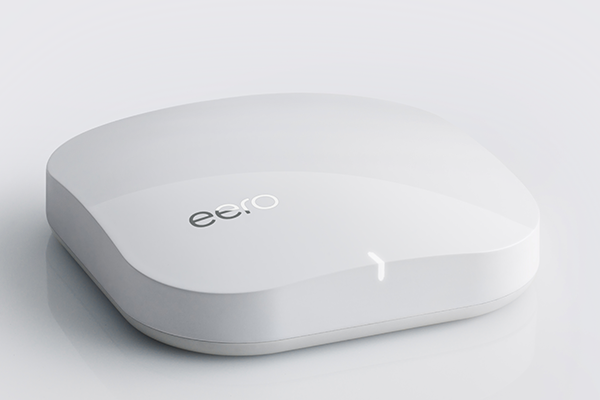 Does Netflix buffer in the middle of Buffy the Vampire Slayer? How about troubleshooting due to mysterious connection issues? Meet Eero, a powerful, self-correcting router that delivers stable internet throughout your home, no matter the obstacles.

Eero’s creators don’t want you to see their product as a router: it’s a wi-fi system. Eero is programmed to disseminate wi-fi throughout your home, completely eliminating dead spots. You’ll connect one Eero to the existing modem, connect it to your smartphone via BlueTooth, and then set up the other routers around your house. The Eero app will strategically find the spots that need the most coverage, so you don’t have to  guess all the dead spots in your home.

Remember when you had to manually reset your wi-fi setup because of connectivity issues? Eero resets itself automatically, and it’ll reroute its signal to avoid any interference. Eero uses a mesh network and switches between 2.4 and 5GHz frequency bands, searching for the clearest frequency and channel. Even something as small as a cordless phone will trigger Eero to switch frequencies.

The major bonus with the device is it’s aimed at the technology-ignorant. You don’t have to do a thing but type in a name and a password for setup. No more ip configuration or angry nights getting your router back on the right channel. Eero aims to remove all of this hassle for consumers with its user-friendly software. Theoretically it’s also more efficient than traditional signal repeaters due to the auto channel-switching and lack of manual set-up.

Despite the marketing (wi-fi system), Eero is indeed a router. Don’t assume you can cancel your modem rental from Verizon after you receive Eero. Unfortunately, you’ll still need it. Another notable mention is the cost and number of units Eero suggests consumers need. For just one, it’s $125 to pre-order. Eero suggests three is the lucky number for the average home, which costs $299. Soon, Eero will be stocked in retail stores, with prices shooting up to $200 for one, $500 for a three pack. Preordering may be your only chance at saving a few bucks for absolute internet reliability. However, Eero is a luxury item that sounds great in theory but has yet to prove itself. It claims to outperform routers from any competitor, even Apple, but we’re not sure how true that statement is as consumer reviews have yet to surface.

Via:  The Verge
Source: Eero