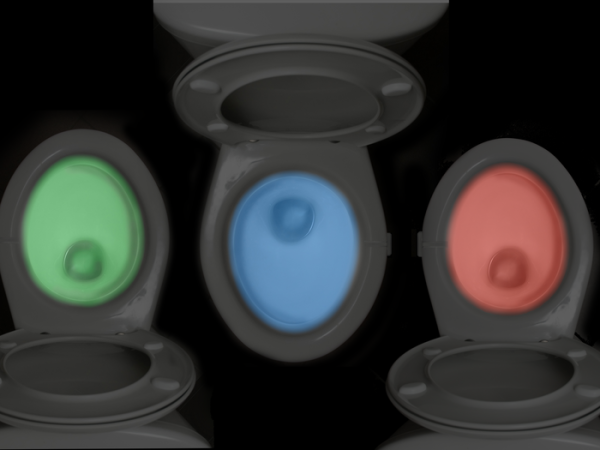 2015 Update: This Kickstarter project was successfully funded with $95,399 last fall. Currently prototypes are still in the works, but the inventors are looking to ship within two months according to their updates to Kickstarter backers. Proof of product has been shown and various lights will indeed light up your toilet bowl with Illumibowl. We’re holding our excitement to test the product in person soon.

We’ve all dreaded it; the late night pee. Yes, I’m talking about urination. You feel that late-night urge and are forced to stumble to the bathroom, only to blind yourself by turning on the lights. That, or aiming poorly in the dark. Thanks to Utah inventor, Matt Alexander, a new product could change this #firstworldproblem for good. The Illumibowl, which is not nearly as secretive or cool as the Illuminati, is simply a light…for your toilet. The clever product is currently on Kickstarter seeking $20,000 in funding. At press time, they had reached $6,000 with 36 days to go.

The Illumibowl is essentially a suction-cupped night light that fits inside of a toilet bowl. The design is much cooler than that, however. The Illumibowl glows upon proximity. Simply walking into the bathroom turns the gadget on. From there, the light alternates between green, blue, and red, while you take that midnight leak. Don’t get me wrong, the product is a hilarious idea that solves a problem night lights have solved for the better half of a century. Thankfully, the humor isn’t lost on Matt and his pitch to Kickstarter either–it’s literally filmed from inside his toilet.

See it for yourself below. Will you be investing in a toilet light? This might actually be my first Kickstarter investment. You know, for its complete necessity…

You can buy one for yourself on Amazon.