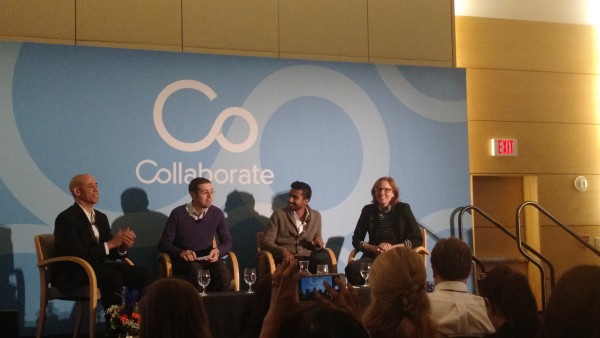 Smith was the first ever female CTO picked in September by President Barack Obama, and it has been a great victory for government technology policy and the glass ceiling for women. As the former VP of Google[x] Labs (think Moonshots), as well as an experienced programmer technologist, Smith is a veteran of ignoring technology’s bounds and thinking further ahead.

She is also known as one of the minds behind Google’s Made w/ Code–an online campaign that encourages young women and girls to try their hands at coding.

“The way we think about CTO’s policy issues is we want to make sure the US is the best place in the world for science and technological innovation,” said Smith.

To show that the government is an open box, members of team noted their efforts to keep open data at the forefront.

“We’ve been using Github a lot more for a lot of our projects in the tech space because that’s where our communities are,” said Panchadsaram.

Panchadsaram also said the United States government is now offering standard jobs for developers, and not just using the “byzantine” keyword-focused USAJOBS descriptions. Considering successful lead developers from Twitter, Amazon, and Google are now flocking to government, to think of the government as low-tech is entirely outdated.

Panchadsaram also mentioned the We the People White House petition initiative, explaining that US is one of the only nations in the world to try it. The Collaborate discussion panel’s MC made a good point in contrast, “What this really underscores is the rebirth of democracy and the potential to explode and go further.”

Despite all of the progress for government web, open data, and current efforts for privacy and net neutrality, Megan Smith still believes there’s a gap. “25% of Americans are not online and that’s a very serious problem,” said Smith.

Smith then underlined her ideals for solving these problems for government including cybersecurity. “I think the best way to keep us safe is to bring the most diverse team to bear on the problem.”

“Using the force of all of us will keep us the safest,” Smith concluded.