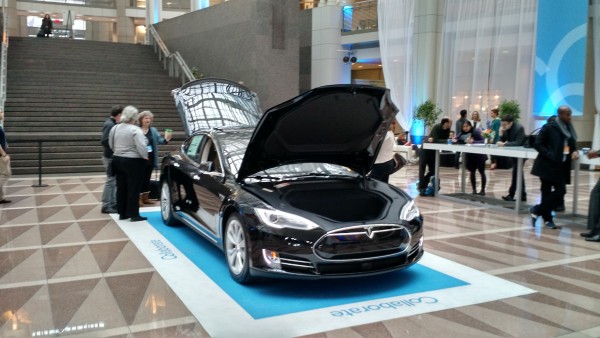 We’ve wandered all around Fosterly’s Collaborate conference in Washington, D.C. this weekend, but the most show-stopping tech of note here is still the Tesla Model S P85D which sits in the middle of the lobby. We had a chance to sit, gawk, and play with the Model S’ internals.

If the 17″ dash display or the $120,000 price tag doesn’t get bulging eyes and dropped jaws, perhaps its ability to use the phone, connect to Wifi, and check on trip efficiency will.  Below is a video of the short off-the-cuff look at one of Elon Musk’s babies.

This upgraded model from the original S includes two modes of driving–Insane and Sport. It also includes traction control options and even a Creep function which allows the car to move forward slowly when releasing the pedal. I was also enthralled to see the estimated 172 miles of driving left in its giant 85 kWh battery (capable of 275m range). That a decent amount of distance (under optimal driving conditions).

You can purchase the new model S directly from a manufacturer rather than a dealership (depending on your state). You can see our full slideshow of Tesla S shots above. If nothing, we all have more impetus to hit up the 2015 Washington Auto Show this weekend.