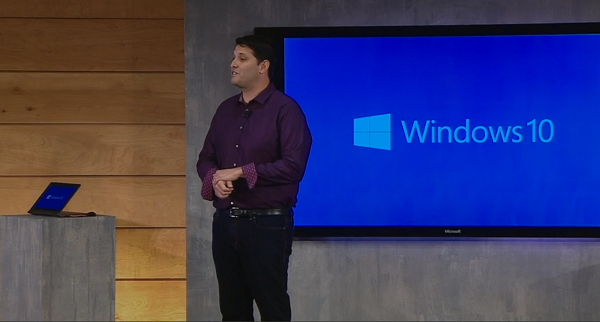 Microsoft is debuted Windows 10 live on Mirosoft.com today. Unfortunately, no one was able to embed the feed, but you can watch it all right here. Microsoft’s big point during this keynote is the fact they asked consumers for feedback on this new iteration of Windows. With 1.7 million enrolled in the Insider Program to give feedback directly to Microsoft, much commentary was considered by Windows customers with over 800,000 pieces of feedback covering 200,000 topics.

But considering how many failed products have been built upon consumer feedback alone, it’s good to note that not everyone knows what they want either. (Steve Jobs loved that latter notion, by the way.)

One of the coolest innovations is bringing Cortana to Windows 10. All of Cortana’s  new jokes, impersonations, and lots of other humorous features will be brought to PCs everywhere and not just mobile devices. She’s pretty useful and arguably faster than Siri and Google Now in many scenarios. She’s also more manageable and customizable like Google Now, making her interests tailored to customers. Microsoft calls it a Cortana “Home Page,” with stocks quotes, news, and all of that same information you would find in Google Cards.

But better than Google Now and Siri, Cortana can search around your hard drive and One Drive to find specific documents and even load them up for you. Photos, PowerPoint, and Word documents? No sweat for this personal assistant. Add that to the ability to type by voice and you have a really great hands-off computer. Emails and word documents can be written up with Cortana and sent. Music and other programs can also be launched, allowing a grand scale of interaction with future PCs.

This functionality is actually pretty slick and shows that 2001’s Dave may already be here. Thankfully you don’t have to give Cortana access to any door locks just yet. Other features are tailored version of Windows 10 for tablets over and below 8″. Smartphones and tablets will have their own feels, but still draw off the Metro UI features everyone is getting used to in Windows 8.

But the biggest news today is that Windows 10 is going to be a FREE UPGRADE from Windows 7 and Windows 8.1 (PC and Mobille) users for one year after its debut. That’s a monster discount and an interesting tactic to get users support closer to the same plane for Microsoft. Talk about an incentive. This also will help developers work towards more devices at once. This cross-hardware OS means Windows Phone could also stand a chance against Android and iOS marketshare down the line, especially with the same applications being able to run on tablets, phones, and PCs.

What do you think of Microsoft’s new ideas? Will you bite? Let us know in the comments.