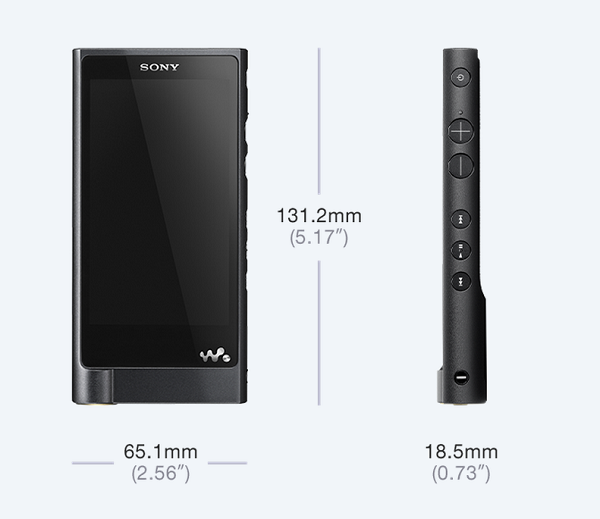 Audiophiles can rejoice this winter because Sony has a new high fidelity media player. A new device known as the ZX2 High-Resolution Walkman debuted during Press Day at CES 2015. Of course, this isn’t the first touchscreen Walkman, as the ZX1 was released in 2013 and several prior without much success. And don’t forget the forgettable $300 Walkman A17 release just last fall.

The ZX2 runs on the dated Android 4.2 Jelly Bean (circa 2012) on a 4″ screen. Its body shape is bit like a chunky voice recorder with buttons on the side and a giant headphone jack at bottom. Looks aside, the ability of the ZX2 to play high fidelity music is where its real charms lie. This Walkman can play virtually any codec you can think of including high-end Apple lossless, WAV, AIFF, and FLAC. It also comes with 128GB of internal storage in addition to expandable storage with a microSD slot.  The sound behind the device is Sony’s S-Master HX digital amplifier, which will help kill distortion and make even the weakest Spotify and Pandora tracks feel rich. It also has enough battery for 33 hours of playtime.

The device looks solid (aluminum and rubber) and heavy in hands-on videos at CES, and it comes in at a hefty price of $1,119.99. This clearly prices out the average audio consumer, and especially so when considering how redundant carrying a Walkman in addition to your smartphone is. That’s why this device is made strictly for audiophiles who can’t get enough of the hi-fi music they paid for.

It also comes with a completely customizable equalizer, and the ability to download and use Google Play apps so owners can use any streaming music service they see fit. Better yet, the Walkman uses Bluetooth and LDAC tech to send music wirelessly to speakers, which is 3x the normal amount of music data usually transmitted by a smartphone.

What do you think of the new Walkman? Is it bringing music to your ears?