Google Hangouts is awful and I’m going to tell you why. Let’s start with a bit of history. Google Talk, or “Gchat” as we know an love it, is 9 years old this year.  When it started in 2005, many of us were just discovering Gmail, let alone the ability to use Gchat. And Google understood this, because at the time many of us were still using Microsoft’s MSN Messenger and AIM (AOL Instant Messenger).

So what did Google do with that knowledge? In 2007, Google added the ability to sync up your AIM account with Google Talk directly, a brilliant move to quickly draw users into the claws of Gmail and Google Talk without much of a thought. Hotmail was archaic, Yahoo was boring, and MSN was simply alien to many.

In essence, Google started to build its own AOL-esque ecosystem right under all of our noses from 2005 forward. Email, chatting, and search with Google became possible from all of one browser tab. Add that with the introduction of Google Chrome in 2008, and Google had the beginning of its own mini-monopoly over the internet.  And it was better than previous attempts, because it was faster (looking at you, Internet Explorer), free, and inherently cross-platform.

And then came Hangouts…

Here’s where the rub started. In 2012, Google announced Google Hangouts, a chat service with different features including video chat and a strong tie to the Google+ network, a social media network almost no one uses religiously. Current stats average use at 7 minutes a month. That’s mere seconds per day.  But the problem with Hangouts isn’t its link to Google+.

It started a warpath on age-old favorite and necessary features of basic chat software. Away messages, statuses, and general “busy/present/offline” information was quickly pared away if not removed altogether with Google Hangouts. Thankfully, Google has left the option for users to remain a Google Talk (original version) user in-browser. But as for your favorite Android application? It’s long gone; peaced out, and never to be used again unless through a third party application. In fact, in late October this year Google announced the Windows application is also being abandoned. 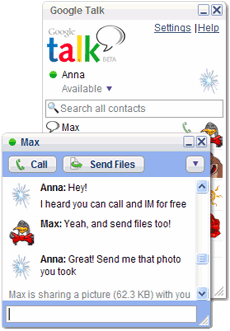 All of this upsets me greatly. With Google Hangouts, users cannot display a status with their goofy link of the week, or let users know if they’re busy. Seriously, how can a user tell whether or not their friend wants to discuss the latest stupid Buzzfeed link of the day if we don’t know if they’re in a meeting?

How do we know if someone is offline or simply on “hide?” And finally, how does adding a “mood” functionality into Hangouts offer anything but more bullshit emoticons? With Google Talk’s existence slowly being threatened, so is much of the vital information needed to communicate with one another on a chat interface. God forbid everyone have to resort to Facebook Messenger (an application many refuse to install).

One of my friends had a his own joking perspective, “Yes, but in Google Hangouts you can put an eye patch on your mom while you’re talking with her.”

The only beneficial feature added to Hangouts (video chat and calling was already available in Gchat) was the ability to see when a friend has read a message. Google throws in a a Hangouts icon below the last read statement in any conversation. It’s helpful, but Facebook and Whatsapp have already implemented this without severing the assurance that someone is actually active online vs. idle.

Plus, most other chat interfaces are blocked in the workplace. What Google has forgotten is that Gchat is a stable function for students and the employed. Without the basic tools of color-coordinated presence (green, yellow, and red like a stoplight), it’s hard to know whether or not it’s appropriate to speak with someone at work. That important indicator for establishing chat etiquette has been completely thrown out the window with Hangouts. Chaos, indeed.

To conclude, I offer a caveat. Recently Gmail has encouraged users to “Try the new Hangouts” in browser. They made it difficult to figure out how to revert back, but thankfully they have offered the option to continue using the chat interface. This is a great compromise, but at first Google threatened this could only be done for a short while. More recently, when reverting back to “old chat,” Google has offered a survey to fill out on WHY you wish to revert back. For all those in agreeance of this minor hatred of Hangouts’ Google Talk-killing attempts, this is your time to speak up and let Google know where you stand on this beloved communication tool.

At the end of the day, I realize this is a small gripe with technology. But for me it’s more than that. There’s sentiment involved here. For me, chat has been a longstanding communication outlet since I was only 10. It’s where I learned to discuss with others on the Internet, and it was a tool that helped me develop my own personal style of writing, voice, and general personality. What Google Talk is doing here is almost sacrilege to what it lured users in with in the first place. Sure, it’s just software. But it’s also a brilliant place to connect with your favorite people.

And hey, maybe you disagree entirely. If you have a different outlook on this matter, please let me know in the comments below.