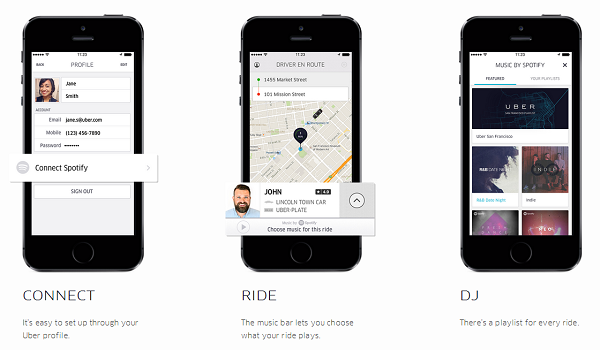 There’s exciting news from cab alternative Uber this week. Uber has announced a new partnership with Spotify that will allow customers to stream their Spotify playlists in their Uber drivers’ cars.  Rumors of the partnership started with the NYT and TechCrunch last week, and now the new deal has shown up on Uber’s website, including the below video explaining how to “DJ your ride from the backseat.”

Uber’s app will now allow customers to connect their Spotify Premium accounts (Read: not free members) to the Uber app and stream music directly to their ride once entering.

“Just connect your Spotify account through the Uber app to stream music on your ride. We’ll get you where you’re going; your music will transport you,” writes Uber.  The bonus is apparently it will not cost the customer data. Signing up is as easy as clicking “Connect” via the Uber app or website. Speculation says  playlists will stream directly through Uber drivers’ smartphones via auxiliary port, but Bluetooth could be another method depending on your driver.

Uber users have suggested interest in the new feature, including Peter Pieh, a Logan Circle resident. “This could be a very fun partnership between Uber and Spotify. I’m going to start curating an Uber playlist for my rides,” said Pieh.

Of course, this likely doesn’t solve my frequent problems with geographically-challenged drivers in Washington, D.C. C’mon, North vs. South, people! Also, I have yet to see an Uber driver open a door for anyone. But hey, that’s small potatoes when you get to avoid disgruntled cash-loving cabbies in dirty, outdated vehicles.