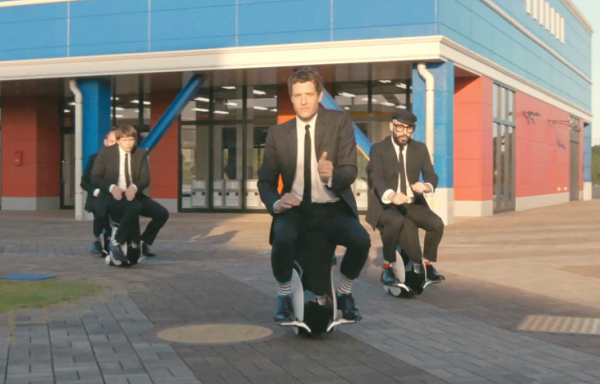 OK Go has never been a disappointment in terms of music videos, with notorious choreography done by one of the band member’s sisters, Trish Sie. And with OK Go’s recently debuted music video, “I Won’t Let You Down,” OK Go isn’t lying. This is arguably one of the most insane one-shot (at least some of it) dance-filled music videos the world has laid eyes on. The track is off OK Go’s new album, Hungry Ghosts, which is currently available for preorder in the UK.

The video is almost unbelievable to watch. If you’ve seen their previous hits using treadmills, this one is equally inventive with its technology use. The band rides what looks to be Honda’s U3-X seated scooters throughout. The electronic unicycles move when leaned upon in any direction (much like Segways). The band members ride them,  following lines and hash marks drawn on the ground as they  circle around each other and a plethora of dancers in a colorful and magnificent display of foot and wheel-work, not to mention amazing cinematography. Check it out for yourself.

The prominence of Honda’s new vehicle is just amazing (Yes, the umbrellas too.). The amount of versatility the shown by OK Go on these “scooters” is quite absurd (and obviously entertaining). Where can I get one now? It’s sad to see this unicycle has been in development since at least 2009, and we still have yet to get our hands on them. Walking is clearly for suckers. If this video teaches us anything, it’s that Wall-E-esque lazing is just moments away for this generation. What do you think?