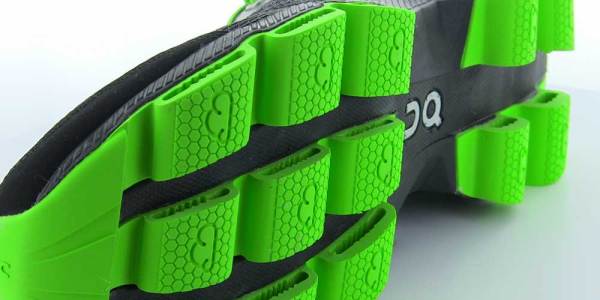 With Vibram FiveFingers’ class-action lawsuit being settled, it’s about time we saw more advances and heavy promises in “barefoot” footwear. Enter: On Running Shoes. The brand new tech-shoe innovation aims to give runners customized cushioning on landing and a barefoot grip when taking off.

What’s different about On shoes is the rubber. The shape, called a “cloud,” is thin and tube-like with small teeth inside which creates cushioning when landing on hard surfaces. On Running’s website claims the clouds “act like little stability balls, responding to every movement on your foot,” giving you control of your feet. Said clouds give runners the soft landing they need, and the shape of the shoe means there’s no adaption/break-in time required like a pair of FiveFingers.

World-class runners like Geoffrey Gikuni Ndungu and Nicola Spirig are wearing On, and it’s quickly gaining popularity, even being named a top 20 running shoe by Runner’s World USA, UK, and Germany.

While the shoe might be great and even comfortable, owner reviews have suggested minute issues like small rocks become a noticeable discomfort. The open road isn’t always clean, which doesn’t help the average runner, and running tracks aren’t accessible to everyone. It also doesn’t help that there are reviews stating On might have some quality control issues and the durability might be questionable. After only 13 miles, Peter Stuart’s Clouds were already falling apart, and the top Amazon review claims after only 100 miles, the front row of clouds on both shoes were broken. They might be great performance shoes for races, but it doesn’t seem like they’re practical for the average runner.

So far, On Running Shoes has some great ideas and is making advances in making the perfect performance shoe. But even with backing by world-class runners, the price range and the quality doesn’t seem to wow us. On doesn’t seem like it’s quite ready for a wide-release quite yet, but perhaps in the near future, it could be giving Vibram FiveFingers a run for its money.