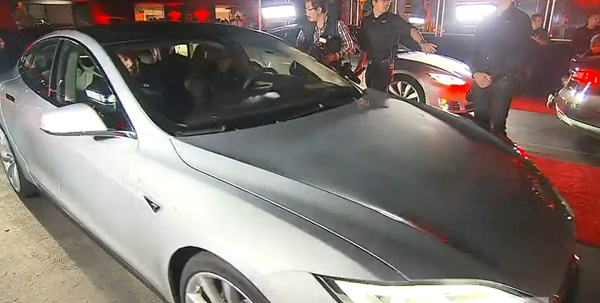 Elon Musk has more tricks up his sleeve this week, one of them being Tesla Motors‘ new Autopilot software for the Model S. Musk told press this week in his “mystery announcement” that the new luxury version of the Model S will be coming with all-wheel drive, a dual-motor, several driving modes, and the hardware and software for an autopilot feature which allows drivers to take their hands and feet off the wheel and pedals whilst driving. You can see CNET’s video in which Tesla discusses the new feature below.

Musk says the autopilot system will soon park Tesla vehicles for their owners and could potentially even pick them up from work. The new feature is reminiscent of Google’s own self-driving vehicles currently under testing. For an even more in-depth demo on the autonomous driving, see Slash Gear’s video below:

The autonomous driving feature will be available in all new Tesla models. According to Musk, the electric vehicle manufacturer has been installing the new hardware and software into assembly line vehicles since before the start of October. The Model S will come with a 85 KWh battery and can hit 60 mph in 3.2 seconds. The driving modes of “normal,” “sport,” and” insane,” dictate how the Model S approaches acceleration. Clearly, with a family of four, you may stick to “normal” for most weekend getaways.

The news comes just behind Panasonic’s announced intention to invest hundreds of millions of dollars into Tesla’s “gigafactory” in Reno, Nevada where construction broke ground recently.  The factory will produce lithiom-ion batteries for its Tesla Motors vehicles which are currently being purchased from Panasonic.