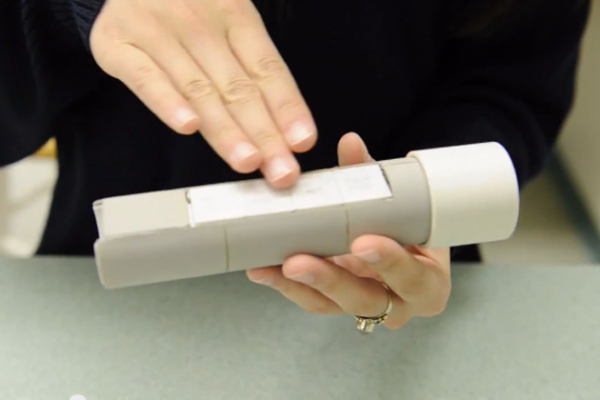 We’ve covered genius children scientists and engineers before, but nothing beats this innovation by 15-year-old Ann Makosinski. The Canadian teen entered a human heat-powered flashlight into the Google Science Fair (GSF2013) last year and won a $25,000 scholarship as a result.

The innovative design relies on inexpensive Peltier tiles which work a bit like a fuel cell. When heated and cooled on opposite sides, Peltier tiles create electricity. As it turns out, the palm of one’s hand is enough electricity to power smaller and highly efficient LED bulbs.

According to Makosinski’s research, the 57 milliwatts created from the palm of her hand was enough to obtain the requisite .05 milliwatts to power her prototype at a usable flashlight brightness. The idea behind her design was to eliminate the need for batteries which use toxic chemicals that fill landfills and pollute the environment. Her flashlight design uses a hollow aluminum tube to allow outside air to cool the Pentier tiles on the bottom while your palm heats the top, creating electricity for the LEDs. The flashlight works for half an hour depending on ambient temperatures.

I’m definitely looking forward to the Kickstarter project from this bright young mind in the future.