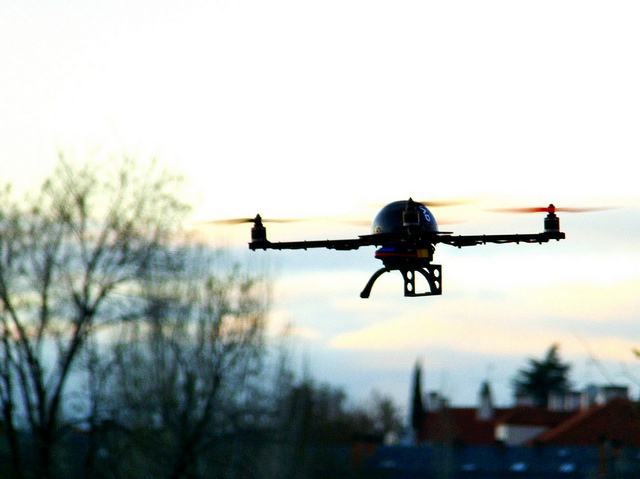 If you’ve been watching the news lately, you may have noticed consumer-sized drones are becoming more and more popular. And with RC-sized drone-copters available to almost anyone, it’s something that the government is ready to pounce on for regulation that has yet to exist. And with thousands of amazing drone-perched GoPro videos on the internet, police and neighborhood watch groups considering local surveillance with drones, and even the possibility of an Amazon drone-based delivery service, the United States is only one step away from drones being a part of daily life.

Some drones fly much higher than hobbyist RC planes (the limit ranges from 2,000 to 50,000 feet) and take good, clear photos on the cameras mounted on them. We’ve seen some pretty incredible aerial views of the world from drones, places we might not have the time or the money to visit. From the comfort of your own home, you can view other states, other countries, other cities, just by flying your drone there. Just check out some of the exciting surf footage below taken by a drone in Hawaii.

The coolest part is that prices for these unmanned vehicles are dropping. The cheapest of drones cost about $100, while the more expensive drones can go upwards $1,000, possibly more. Not exactly affordable fun, but for your own UAV, that’s pretty jaw-dropping.

But as drones become more popular and less expensive, misuse of such vehicles is coming to light. Case and point: Just last week a New York man was arrested for flying a drone over the US Open this summer. I’m sure Roger Federer could have fended it off with his racket, but talk about security a breach. Backpacks aren’t even allowed at the event.

And how about your neighbor flying a drone over the fence to spy on you? Thankfully, the law does protect against stalking and peeping toms, but regulations on more drone-related problems are still to come. The Federal Aviation Administration (FAA) states that drones should not fly over 500 feet, within a few miles of an airport, or in highly populated areas. But it doesn’t seem like drone enthusiasts seem to know any of these rules yet, since none of them have specifically passed into law or been enforced.

In addition, unlike trained pilots,  RC control is completely amateur and unpredictable. Drones are falling out of the sky from collisions, running out of power, or even getting attacked by birds. Although seemingly harmless, if drones crash in more populated places, public safety is obviously going to be an issue. In one instance, the FAA fined a New York resident $2,000 for flying a drone off a building in Manhattan, which bounced off a couple buildings, eventually landing on a public sidewalk. Currently, drones are still a new phenomenon, and drone enthusiasts are flying them everywhere with few consequences, with the exception of some unlucky people.

The drone craze has just begun and doesn’t look like it’ll be slowing down anytime soon (at least until the government gets involved). As these prices for unmanned tech continues to drop, we’ll be seeing more tension with RC enthusiasts and the FAA. But for now, it looks like the rules are ambiguous.