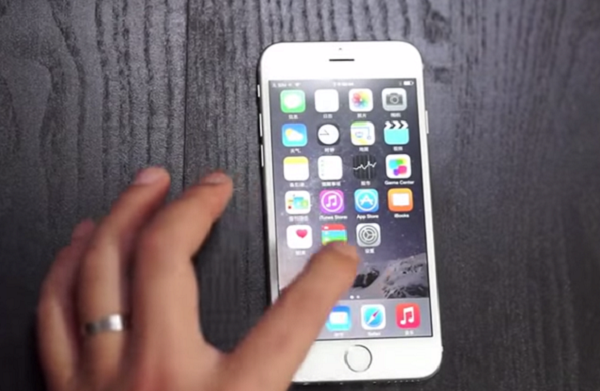 It’s been a long time since the iPhone 5C and 5S debut, and Apple fanboys have been waiting patiently for the newest iteration of the pristine smartphone. And despite that long wait and Apple’s intended reveal tomorrow, the iPhone 6 appears to have already leaked in China in a video uploaded to YouTube.

While we can’t translate the video (Mandarin), the device appears to be another white, aluminum unibody smartphone made by Apple with a screen anywhere between  4.7 and 5.5 inches, and the same fingerprint sensor you’ve seen on the current iPhone 5S. Otherwise, it’s basically an identical appearance to current models, save for it seeming to have been flattened and completely re-engineered internally. If you were to compare it anything, the HTC One or One Mini would be the closest. There are two white stripes on the would-be iPhone six, near the top and bottom of the backing (just like the HTC One M8).

There have been previous leaks of the device and the video above seems to match the one leak below earlier this year by Fed & Volk, which only shows the phone’s casing.  Stay tuned for more updates as we get closer to Apple’s iPhone and iWatch event tomorrow. And be sure to let us know what you speculate to see from the smartphone giant below.