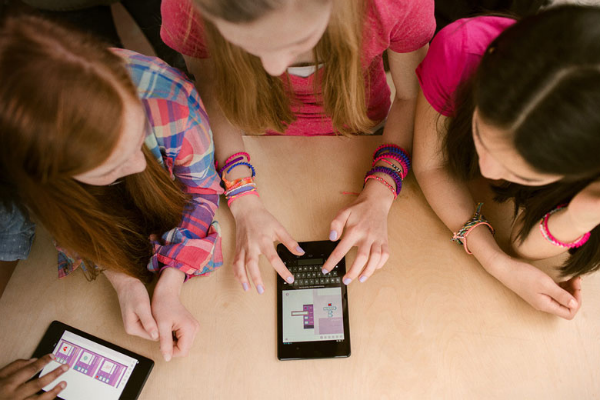 “And when you learn to code, you can assemble anything that you see missing.”

Above is a line from the landing video of the new Google initiative, Made w/ Code, appeals to young women to consider what they can do by studying computer science. Created by Google, along with a collection of strong women’s rights activists ranging from Chelsea Clinton and Mindy Kaling to Girls Inc., the video, the initiative, and the activities on the site are compelling and creative. The basis for this project stems from a lack of female representatives currently participating in the computer science field. In fact it’s reported that only 1% of high school girls are interested in pursuing a computer science degree and only 12% of computer science graduates are women.

Made w/ Code is trying to help address that. Made w/ Code creates some really engaging opportunities both at home and in the classroom for girls to start learning the basics of JavaScript, HTML, application design and even 3D printing.

One of the most successful, viral, and expensive investments on the developers part is a simple drag-and-drop style coder which allows users to code their own 3D printed bracelet. After completion Google and Shapeways will print and mail your bracelet, for free. The whole Made w/ Code initiate has a price tag of $50 million; this is a small investment that will have a major impact on future female creative designers and programmers.

The site also highlights some amazing girls and women who have already become successful in various coding fields. Including Ebony “WondaGurl,” whose beats are featured on Jay-Z’s single, “Crown,” off of his most recent album and 18 year old Brittany Wenger whose code finds patterns in breast cancer biopsies improving the diagnostic process.

Along with Made w/ Code, Google is also sponsoring a course through Codecademy that allows high school age girls to participate in a 12-hour JavaScript curriculum. At the end of the curriculum, participating girls will earn a $100 voucher for their schools.  This has the potential to benefit not only the participating girls but all students through purchases such as tablets, coding programs and 3-D printers.

As a relatively young college graduate and a self-taught female coder, I absolutely love this initiative and am even a little bit envious of the support and activities being offered. I mean, there’s even a resource packet offered to help girls, their families, and even teachers host a Made w/ Code party.