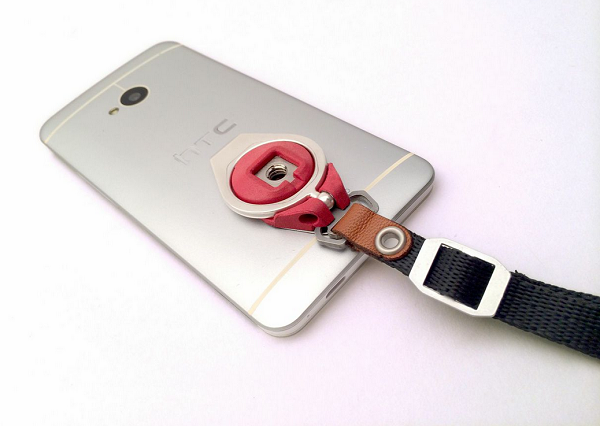 You dropped your smartphone, so you got a case for it. You know, to thwart all those bumps and bruises it undertakes via your klutzy and apathetic care. The problem is cases only stop cracks to your LCD and have no added functionality. They don’t give your phone a kickstand or help you mount it as a GPS in your vehicle, and they certainly don’t let you hang it from a wall. Yet Plust, a design firm based out of Providence, RI, has created a product to do all of these things:  The Linkmount System Smartphone Enhancement.

The staff-picked Kickstarter began its funding period on July 31 and was fully funded within the first week. At press time, there were 52 days left to go and $$54,904 was invested by backers, far beyond the $35,000 goal.

For just $20, this product could keep your smartphone in supreme safety and utility. The entire system includes a leash, grip ring, kickstand, and a magnetic dock for easy mounting.  It also has a universal input for a tripod screw. Unfortunately, like all Kickstarters, you’ll have to wait a bit before they finish this product with your investment, in this case until December. Higher investment levels offer more features and add-ons, but the basic system is enough to catch the eye.

The product looks to be well-engineered with sturdy and sophisticated parts. The metal grip ring spins 360 degrees for easy gripping and the adhesive attached to your device uses a clever and strong 3M tape that can be removed without residue.

Personally, the idea of requiring such a well-engineered device  to make your smartphone functional is ludicrous. However, considering how handy a lanyard would be for taking pictures, the kickstand for watching videos, and magnetic docking for placing out of the way, I definitely and am thinking about the investment. Sometimes all-in-one is just so hard to ignore.