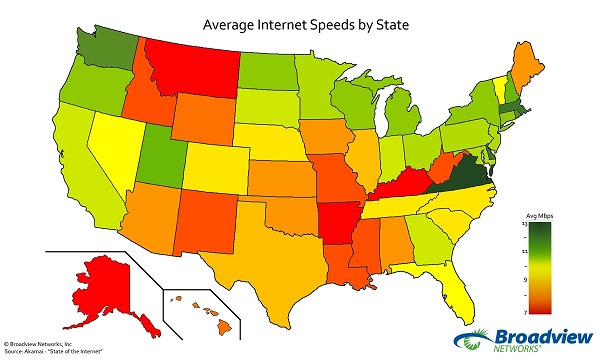 If you live in the Washington, D.C. Metro Area, chances are you have pretty speedy internet according to a Broadview Network map put together based upon Akamai’s State of the Internet report data.  In the map, each state is put on a scale of 7-13 average Mbps, with green noting fastest and red the slowest. Virginia, D.C. and, Maryland are all a green rating according to this chart, with D.C. hitting an average of 12.8 Mbps for the first quarter for 2014.

Of course, if you’re a regular consumer of cable internet (not a government agency), you may wonder how much your ISP has to do with the bottle-necking of speed to your home’s modem.  All of this said, anyone in Alaska, West Virginia, Montana, Arkansas, New Mexico, or Missouri may politely ask you to quit complaining (they’re all rated orange to red).

For some broader speculation on these rankings, Webpage FX‘s  breakdown list of ISP ownership by state might be helpful. With Verizon owning most of the Washington Metro Area, your service with Comcast, Cox, or AT&T may be less advantageous to breakneck internet speeds. Also, Time Warner Cable and Cox appear to own most of the red states on the Braodview Network map, despite their fair/average rating of service on the one below. 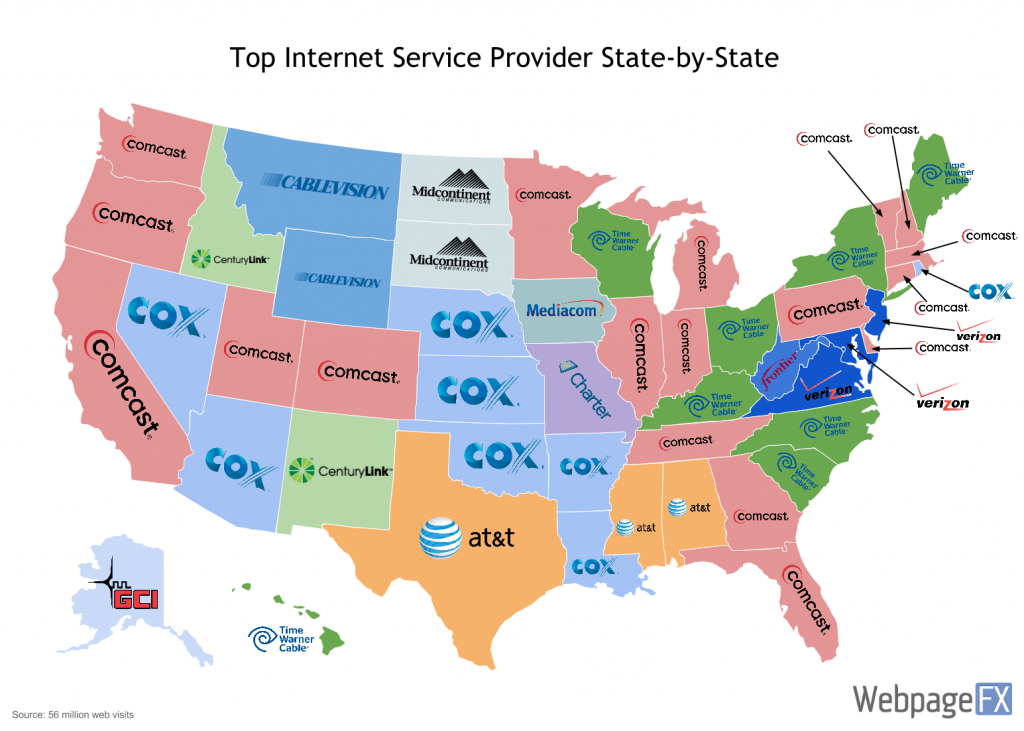 Nevertheless, as it was noted in the past, ISPs have been throttling internet speed for some time now. Google also has taken note, offering its Google Fiber service in areas of such complaint, forcing ISPs to compete. If you’re curious on your own personal ISP issues, it may also be helpful to check out the FCC’s broadband coverage map here.

By correlating these maps, consumers could deduce that ISPs in slower speed states are not doing as good of a job delivering internet services as higher speed states. For example, Cox seems to be delivering middling service, while Comcast is doing a better job, and Verizon is leading the pack.

But what’s more interesting (or frightening) is seeing how influential Comcast will be if their June $45 billion purchase of Time Warner Cable is approved. Considering Comcast’s well-documented customer service woes, the near-monopoly could be potentially quite dangerous to the public interest.

So how do these rankings match your state of internet bandwidth? Let us know what you think below.