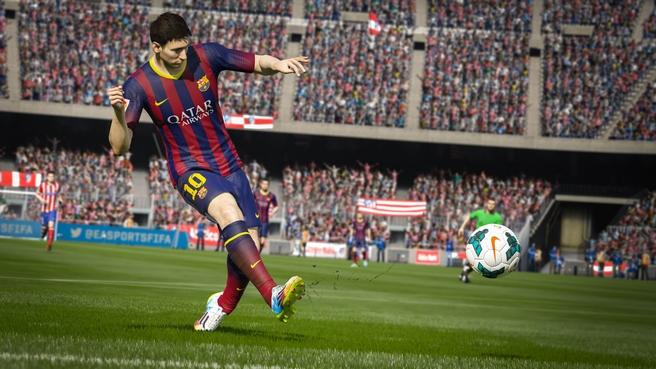 In preparation for the release of FIFA 15, out September 23, EA Games published an in-depth list of new features in the game, including videos of the gameplay. You could relive your favorite moments of this year’s tournament, even Suarez’s biting problem.

The finely tuned graphics for the new FIFA game will give the players more detailed faces and muscles. Not only are their physical appearances more lifelike, but even their movements will be characterized by their real-life counterparts. EA claims the Leo Messi in FIFA 15 dribbles and runs like the real Argentine soccer star. The players’ uniforms are getting the same treatment—according to the conditions and their movements, dirt and grass stains will mark a player’s uniform. Even the field will deteriorate according to the game’s history.

According to EA, the players will have automatic reactions to pivotal moments of the game. Reactions to the bad and the good—missed goals, spoiled chances, incredible saves—have been programmed according to each player, reactions you’ve probably seen this summer. Even though EA’s nailed Suarez down, he isn’t the only one. All the players have been made more physical and are able to use Possession Tackles to fight for the ball. The game guarantees “new shoulder barges and big fall physics,” along with full-body defending and shirt-pulling. The ball trajectory has been modified to be more realistic, making it easier to anticipate its movement.

Even the smallest details have been improved. The LED ads surrounding the field are animated, corner flags will move, and with each goal, the goal frames will shake. Even the audience has changed too; now the audience reactions are no longer just general reactions, but are now based on the country or club selected. These changes may seem small, but it gives each game an authentic feel.

The list of new features goes on, and it’s incredible to see the level of detail in the new FIFA game. If you’re a fan of soccer and the FIFA series, be sure to pick up the new FIFA 15, even if it is just for Suarez.