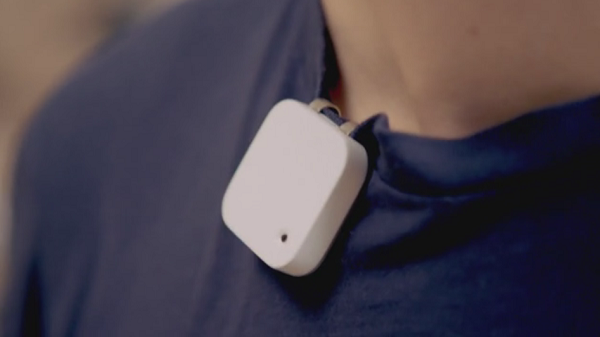 Just when we thought Casey Neistat’s use of Snapchat and GoPro cameras were the future of life vlogging, Narrative Clip arrived. This tiny $229 camera clips on your clothing and documents your life by taking two 5-megapixel pictures every minute. The Narrative Clip can store up to 6,000 photographs (8 GB of memory) and has a battery that lasts up to two days.

The cool part is that it’s completely passive in use. The weird part? Narrative Clip just keeps going, no matter where you are or what you’re doing. If people already thought Google Glass was creepy in public places, you can  imagine the similar privacy issues with the Narrative Clip. The device also has a “smart algorithm” that uses GPS and time data to pinpoint locations you may have been (bars, restaurants, etc.) Photographs are directly uploaded to Narrative’s cloud data servers, and all of that content can be managed with their Android/iOS application. The internals include a GPS, accelerometer, magnetometer, LED lights, and obviously the camera.

Narrative clip comes in two versions, one for $229 and the other $279. The extra pricing is for the amount of  Narrative’s Cloud Service Subscription included. $229 gets you three months free and $279 gets you 12 months. This is also a bit of a catch to the product, because continued use requires a subscription, at least for all of the perks. Local storage is an option with the Narrative Clip, but you will be unable to upload to the Cloud later or use the mobile applications. Thankfully, you can turn the Narrative off. Total darkness like your pocket will put the Clip into sleep mode. To wake up the device, a simple double tap will do.

Privacy issues aside, the idea of passively documenting life is a fun one. All the time spent in social situations or on vacations actively documenting can be a real drain on living in the moment. Why miss your child’s first steps by staring at a digital screen? Why be rude your friends by taking out your phone every two seconds to take a Snapchat or upload an Instagram? In the end, both purposes will likely coexist, but Narrative has the added benefit of doing it hands and mind-free. Of course, without video, it’s also fairly limited like a weather camera.

Narrative Clip comes in white, grey, and orange and only weighs only 20 grams. Charging and uploading by hand is done via USB.

Would you buy a Narrative Clip? What do you think of the Big Brother and privacy implications of the product? Let us know in the comments.