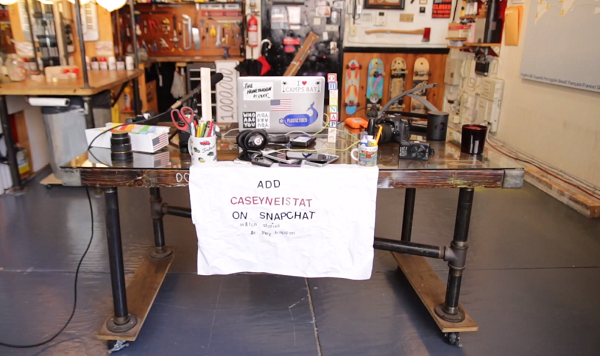 Snapchat Stories are the future of vlogging (video blogging), and internet-renowned filmmaker and adrenaline junkie Casey Neistat and I are here to tell you why. No, I’m not anywhere as cool or interesting to follow.

If any of you know me personally, you’ll know I’m obsessed with Snapchat. It’s an amazing and stupid communication tool that I can’t get enough of. Here’s my daily commute; here’s the pool I’m lounging at today; here’s me eating a bacon BBQ burger with a nice IPA at Meridian Pint. Snapchat is a great and tacky way to maintain friendship with those close to you by exchanging pictures and videos of your daily random activities. But the best part of the app is the feature of Snapchat Stories, something Neistat, an idol of mine, has started to take seriously. Check out his video explanation below:

As Neistat points out, Snapchat Stories have changed that game for video blogging, and he has taken note by documenting, in real time, his daily adventures for all to see. Oh, and he’s also taking advantage of the interest by uploading them to YouTube (talk about Adsense). Sure, he admits the videos are crappy and lack all cinematic value, but the Stories are still absurdly fun to watch.

Recently Neistat took his iPhone paddleboarding and documented waiting for his kid at the movies. Obviously they both remarked at how absurdly long Transformers 3 is. He also took his on a skateboard adventure through Central Park and on the Subway. I loved the 3 am trip to his favorite neighborhood bodega, how he’s constantly annoying his wife with the filming habit, and his random YouTube star get togethers. Oh, an how his fans are constantly jumping in on his own videos. It’s brilliant.

And honestly, it’s a bit like crack. These Snapchat Stories beat anything the producers at E! or MTV could ever put together (as if that’s saying much). As voyeuristic as this type of documentation and star-following is, there’s a big opportunity for celebrities or any genuinely interesting person to jump on board. Imagine Brangelina and Matt Damon documenting their trips to Africa or life on film sets, pitching their causes and using their fans in a somewhat interactive and productive manner. Ludacris and a plethora of entertainers are already doing a bit of this on Instagram with daily videos uploaded to Facebook. However, it’s just not the same. Snapchat’s disjointed, yet stitched together “Stories” are what keep me watching Casey and and my actual friends’ lives. And the 24-hour expiration date gives users a perfect time limit to deliver a full day’s events.

After watching Neistat’s stories, I was even inspired to add my own full-fledged tales, adding actual monologue and contextual description to my snaps. Last weekend I filmed my bike ride to the tennis courts, took snaps of lunch, took video of my stop at a DC public pool, and I documented it all in a 192-second story for everyone to see. I even hit some conflict when I arrived early and couldn’t find my tennis partner. Story arc, people! It was fun and it wasn’t even taxing to do. Of course, unlike Casey, mine have disappeared into the ether as the developers on Snapchat intended, 24 hours after they were filmed.

What’s your take on the video log? Will you be filming your own Snapchat Stories? If not, you can always live vicariously through @CaseyNeistat on Snapchat.