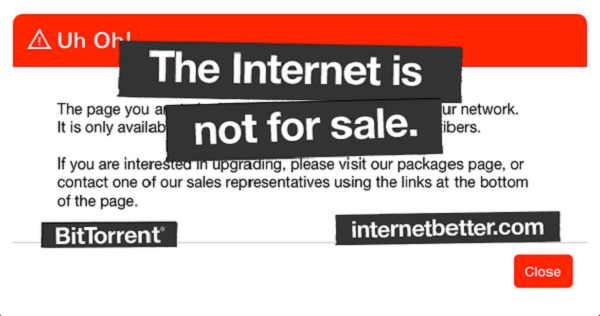 Can you imagine a world where Net Neutrality faltered and the world had to pay up for faster loading of “priority” websites and services on the internet? If the premise of inequality of bandwidth isn’t terrifying enough, BitTorrent has made a parody website called “Join the Fast Lane,” showing just how important freedom of knowledge and equality of data and web bandwidth is to the world. The website is an offshoot of Internetbetter.com‘s campaign to uphold Net Neutrality and petition the general population on the fight at hand against it by the nation’s ISPs.

Fast Lane introduces itself with the following ominous statement: “The future of the Internet is here. Receive priority access to dozens of websites and services, with more being added every month. Priority sites load up to 35x faster than non-priority sites. Cut through the noise and enjoy a premium, curated experience.”

Frightening, to say the least. On Fast Lane, users looking to boost their “VideoTube” and Movieflix” streaming services are recommended upgrade to bundle packages. Sound familiar? And thankfully, users only have to wait until “Summer 2018” for these services (err…problems) to become a reality because, as Comcast has noted publicly, they’re only willing to commit to upholding net neutrality until January 2018. 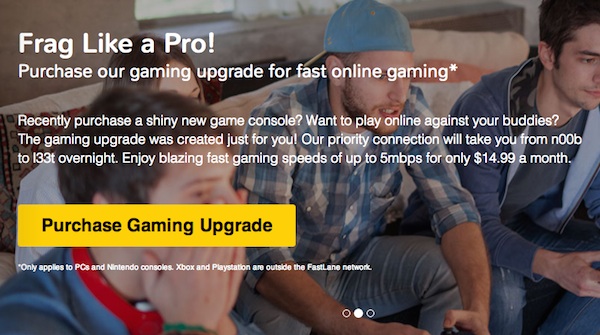 But let’s not forget the gamers. Be sure to get your wallets ready, because fragging definitely isn’t free when the Fast Lane ISPs get their hands on priority bandwidth. Join the Fast Lane shows four packages available to pay up for your priority internet speeds ranging from “Basic” to “Platinum.”

According to Jascha Kaykas-Wolff, Chief Marketing Officer at BitTorrent, the end goal of the project is to urge consumers to let their voice be heard.

“As an organization we believe that it’s important to bring awareness to what might happen if the FCC and corporate interest wins over net neutrality,” he said. “Parody is an effective tool and in this case ‘jointhefastlane’ brings home what may not be far off from a future truth.”

It seems to us that BitTorrent has succeeded in achieving the “all too real.”