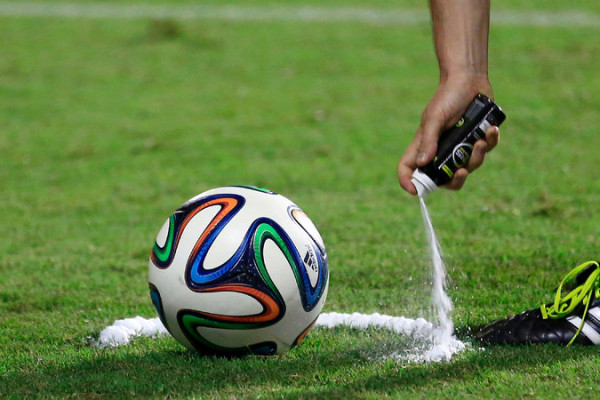 If you live on this planet, chances are you’ve seen some of FIFA’s 2014 World Cup in Brazil this summer. And if you happened to sit down to watch Brazil knock down Croatia 3-1, it’s likely you saw referees spray foam on the ground at some point during the game.

So what is this stuff? The name of the spray foam is 9:15. This a nod to the ten yards of distance (in meters) required between defenders and the ball during free kicks. This vanishing foam looks a bit like shaving cream and marks the ball during the wall lineup and other penalty (free) kicks. And then, poof. As soon as it was sprayed down, it dissolves into the grass. Okay, maybe it’s closer to a minute at an estimated 45-120 seconds dissolving rate (although reportedly it can sometimes take up to five minutes).

The foam was actually invented by a journalist, Pablo Silva, and it has been used in games prior to these World Cup matches, such as the 2011 Copa America tournament. It’s also non-toxic. You know, just in case a stray cat or football player actually eats dirt, which seems to happen more often than not. And the novelty is definitely apparent, especially when it accidentally gets sprayed on players shoes like in this video below.

The spray comes in an aerosol can and can be seen carried by all referees on field. 9:15 seems to help ease the communication between players on the field. If nothing, it’s still an interesting tool to break up the monotony of football players faking injuries.

Silva told the Associated Press that 9:15 was developed with a team of chemists and instructions on proper use were given to all game officials.