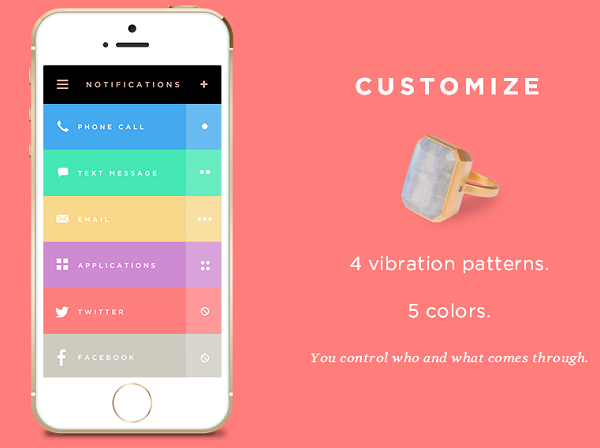 Jewelry is already pretty pricey for the glamour, but imagine it had actual technological utility. That’s exactly Ringly’s plan, who is now selling four differently-colored “smart” rings aimed at a female demographic.  The New York-based startup launched its presale campaign today for its new tech product. The company is looking to raise $60,000 for its first batch to ship this fall. Just don’t get your hopes up for video chatting your SO on your ring finger just yet, because Ringly’s only features are…vibration and blinking.

Ringly’s rings will vibrate in four different patterns set to whatever notifications you choose through its own Android/iOS app that connects via Bluethooth. Whether it’s a text, phone call, email, or 15-minute meeting reminder, Ringly has you covered on keep your phone in your pocket and mind on your work. Ringly can also be used for specific application notifications like Facebook or Twitter.  It’s a bit like morse code, with dot patterns relayed to different duties. There is also a blinking notification light on these models (in various colors), which can be used in combination with the vibrations for custom notifications.

As someone who hates wearing a watch, ringed jewelry almost sounds more practical for a smartphone extension. I’m just a little curious how people would respond to my finger vibrating in public. Check out the minute teaser ad below to get the gist:

Ringly’s “Fall” ring comes in 18K matte gold and “Precious and semi-precious stones.”  These include an Emerald, Rainbow Moonstone, Pink Saphire, and Black Onyx. Ringly told us battery life lasts 2-3 days and a charging cradle/box will facilitate Ringly recharging (A bit like the Samsung Galaxy Gear).  Ringly comes in four gaudy color names: Stargaze (black), Wine Bar (magenta?), Daydream (opal?), and Into The Woods (emerald green). The first 1,000 rings sold will have an actual diamond included. You can preorder yours now for 25% off ($145, save for Into The Woods) here. They retail between $195 and $260. Who says costume jewelry has to be cheap? We leave the sex toy jokes to you.

For the full press release, check below:

Etsy and eBay Alums Team Up to Launch Ringly, A Beautiful and Discreet Line of Connected Jewelry to Ensure Women Never Miss an Important Message

NEW YORK – June 10, 2014 – Ladies: how many times a day do you miss important calls or texts because your phone was buried in your purse? New York-based Ringly is launching its pre-sales campaign today to solve this recurring problem with the first truly stylish line of smart jewelry that caters to a woman’s simultaneous need for connectivity and independence.

Whether you hate missing texts from family or calls from clients, lose track of time and arrive late to an important meeting, or are tired of keeping your phone on the table while you’re out with friends, you’ve experienced these problems.

Ringly is turning these situations into a thing of the past with a beautiful line of connected rings that let you put your phone away and your mind at ease. Backed byFirst Round Capital, Andreessen Horowitz and PCH, and created byeBay andEtsy alums, Ringly packs powerful, miniaturized technology into stylish rings designed by the team’s jewelry designer and FIT alumna.

How does Ringly keep you connected in style?

“Our goal is to create products that are both stylish and useful, that women will be proud to wear,” says Ringly co-founder and CEO Christina Mercando. “We believe that the future of wearables is in building discreet technology that integrates seamlessly into your life and makes your day-to-day easier. The more I use my Ringly, the more it’s like a personal assistant telling me what to do — plus there’s something so fun about having my jewelry talk to me!”

Ringly’s pre-sale campaign officially launches today, and the company has set a goal to raise $60,000 to fund production of its first batch of rings that will ship in Fall 2014. The ring will come in three sizes: 6, 7, and 8, and the first 1,000 rings sold on Ringly.com will include a real diamond in the side of the ring (where the notification comes through). “Early bird” pricing will start at $145 and last for a limited time only. Refer your friends and you’ll get 10% off for each ring they purchase: 10 friends, and your ring is free!

To find out more and get your Ringly now visit:www.Ringly.com.